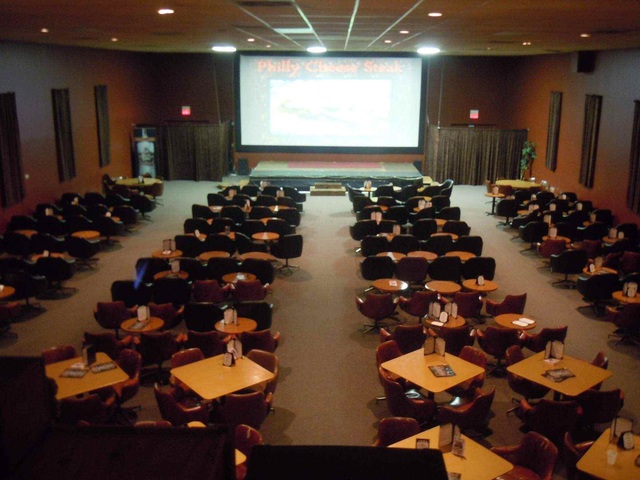 The Tampa Pitcher Show is an independent cinema. Serving an all homemade dinner menu also serving beer, wine, mixed cocktails and homemade Sangria. Our full dinner menu is served while you watch the movie. It was opened on June 4, 1982, showing first-run movies and hosting special events. It was closed on September 30, 2016.

Are you charged a flat fee for running film?

My wife and I stopped going to the Pitcher Show when admission went up to $6 a ticket. half the time no ticket was ever issued, and the sound and sight line are HORRIBLE!! the only thing they have going is the HUGE portions of food you get. We can drive to lakeland to the Carmike Mugs and Movies and it takes us the same amount of time to get to, and the floor is at least platformed to a better sight line than the FLAT FLOOR with NO SLOPE that looks like a store turned into a “Restarrant with a big screen” Serious upgrades need to happen, don’t know how Pitcher show stays open showing movies?

The best cinema pub I have been to is this one in Va. This company knows how to do it. http://www.cinema-cafe.com/hampton.html It’s a old Regal stadium 12 turned into a Cinema Pub.

Does this business have a real screen and a projector to run film, or is it just a restaurant running DVDs on a large monitor?

I wish they would take this place off the site, it’s an embarrassment.

All my years of living in Tampa & consistently driving by this place and I’ve NEVER been there…nor do I know someone who has…but I’ve always been curious.

Judging from Chuck’s comments, doesn’t sound like its worth my time, I’ve been to the Carmike Mugs in Lakeland once & was quite impressed.

Wow-maybe I’m missing something, maybe the extremely negative (albeit, ancient) comments are directed at a different theatre someone had in mind or maybe the author(s) of these comments have some underlying agenda against this theatre and/or its management/owner because after doing a whopping 5 minutes of Google research, I have determined with 100% certainty that this theatre is not only a bona-fide movie theatre but an extremely unique one at that. I’ve never been to this theatre (or city, or state for that matter) and stumbled upon this listing purely by accident however the said comments intrigued me enough to take a closer look. There is a screen (no TVs in sight), a professionally decorated auditorium (albeit tables instead of fixed seating which makes perfect sense, given the venue), it’s been around for well over 30 years, had/has 35mm projection,went through the same struggle as all the rest regarding digital conversion, etc. Assuming that the negative author isn’t thinking of someplace else and/or doesn’t have an underlying agenda against this place, it does bring up a very interesting question: what is a movie theatre? What is a cinema treasure? To me, and I’d imagine most of us, it’s a venue that shows motion pictures to the public for entertainment (and sometimes, education/enlightenment) while respecting copyright laws. Period. It’s a beloved place (with or without walls) where people gather together to watch movies, regardless of the quality of the location, it’s facilities, staff, showmanship, etc. Not every theatre is The Radio City Music Hall or Bengies Drive-In. Of course, any who know me personally or have kept track of my photo uploads, theatre uploads and comments can easily attest to the fact that while I cherish the undeniable majesty of the great movie palace and find its demise despicable, nothing fascinates me quite like that little 120 seat movie house in population 200 West Virginia that only lasted from 1935-1950 or that haphazardly built and operated 200 car drive-in built in 1975 in the worst part of Chicago that only lasted long enough for the land to gain enough value for development.

My taste, of course, is mine alone, and not something I expect or demand anyone else to share but my definition of a theatre, a cinema treasure and the respect I demand for all of them is what’s correct and something that anyone & everyone who claims a love for theatres should share.

While I usually don’t post photos that are not my own or of my own artifacts (unless it is a particularly rare photo of a particularly rare theatre that would not be represented otherwise), least of all, one that is still operating, I am going to post a couple restriction-free ones I snagged off Google simply to clear this theatre’s name. I will also try to post the links to a few articles about it in a future comment.

Thank You Anthony for clearing our name and 35 Years of service to our community. As a independent cinema it is hard to contend with some ignorant and or agenda driven comments that are put on the internet. And above all thank you for having a mind of your own.

The Tampa Pitcher Show’s last day of operation was September 30,2016.