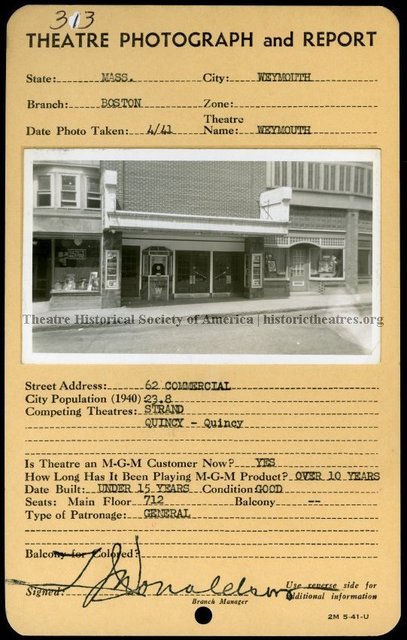 A neighborhood theatre located in Weymouth Landing which served the northwest corner of Weymouth and the southeast corner of Braintree. The Gem Theatre was opened around 1927. By 1931 it had been renamed Weymouth Theatre. It was still open in 1952, but had closed by 1955.

The Weymouth Theater was on the east side of Weymouth Landing directly across from the Sacred Heart Church rectory. It was of wood-frame construction and apparently was built in the late-1920s, possibly as a replacement for the Bates Opera House nearby on the west side of Weymouth Landing (in Braintree) just south of where Marion’s Shoes is located. There were live shows at the Bates and I assume movies played there too. In the Fall of 1954, a new friend of mine told me that she had just participated in a talent show on stage at the Weymouth Th. on a recent Saturday morning. How I wish now that I had asked her for details about the building!! (I never went into it). By 1958 it was closed, and it was demolished around 1959 or 1960. Nothing was ever built on the site.

The photo on page 22 of “Weymouth” by Sullivan & Tighe (Arcadia Pub.,2001) shows part of the Weymouth Theatre in the center background. You can see the tall stagehouse covered in tarpaper with a fake brick pattern on it, plus the top of the left sidewall. The photo dates from 1935. This theatre was included in the MGM Theatre Photograph and Report project. The photo of the facade dates from April 1941. The Report states that the theater is showing MGM product, that it is less than 15 years old, is in Good condition and has 712 seats, all on one floor. The facade appears to be covered in the same fake-brick tar paper. There are 2 double doors and a box offfice below the marquee. But the odd thing is that there are commercial buildings on each side of the theatre. In the 1950s, my memory is that it was a stand-alone building with nothing on each side.

I recently saw a photo of the Weymouth Theatre taken in 1937. The photographer was standing at the edge of the sidewalk to the west of the theater and shooting eastward down the street. On the marquee is posted Disney’s “Snow White”. The caption says that the marquee was new and had just been installed. The theater had commercial structures on both sides including a large brick building to its right (east). My hazy memory of the Weymouth Theatre in the 1950s is that it was free-standing and did not have buildings next to it, but I could be wrong.

I took a closer look at the 1937 photo mentioned above. (It’s among a group of old photos posted on the wall of a barber shop in Weymouth Landing). The facade of the theater looks like real brick, and not the fake brick tar-paper as mentioned above. However, I still think that the stage-house was sided with the brick-patterned paper.

dwodeyla says that in the 1934 Film Daily Yearbook, the Weymouth Theatre is listed, with 678 seats.

In the Street View photo above, the Weymouth Theatre was located on a vacant lot just around the bend in the street to the left; directly across from the brick school building in the distance.

The Weymouth Theatre was originally called the “Gem Theatre” and was on the site of a popular tavern opened in 1741 and demolished in 1927. This info appears in an Arcadia book “Weymouth - Then and Now” published in 2016.