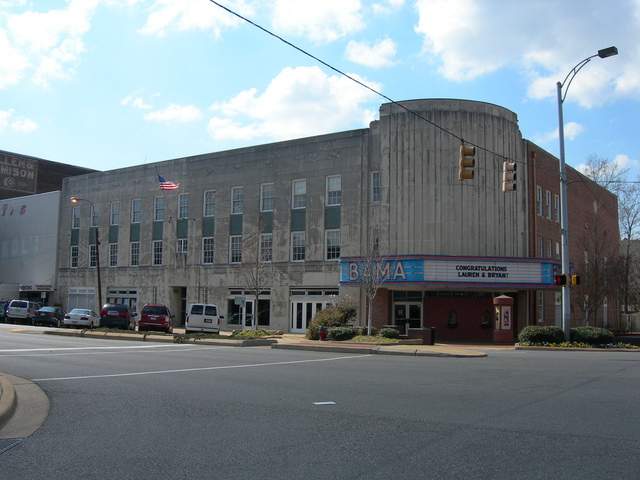 A mixture of Art Moderne, Art Deco, Beaux-Arts and Atmospheric styles, the Bama Theatre opened on April 12, 1938 with Bobby Breen in “Hawaii Calls”. It was Tuscaloosa’s first air-conditioned public building.

The interior originally seated 1,230, including the balcony, with the entire orchestra and balcony sections decorated as a reproduction of the Davanzati Palace of Florence. Twinkling stars and clouds on the night sky ceiling completed the open-air feel of the performance hall.

In 1976, the Bama Theatre was converted to a performing arts center and for several years was home to the Tuscaloosa Symphony, Theatre Tuscaloosa, and Tuscaloosa Children’s Theatre shows, among others.

When Theatre Tuscaloosa built its own home in 1999, the Bama Theatre returned to showing classic, foreign, and art films with its Silver Screen Series.

This is the second Bama theater in Tuscaloosa. The original Bama became the Druid.

Among other things there is a pretty cool virtual tour.

From the early 1940s, a Bama employees group photo.

There was a nice video of the marquee of the Bama in the Joan Baez documentary that aired last night on PBS.

From 1938 a postcard view of the Bama Theatre in Tuscaloosa.

This $200,000 (original 1,230-seat capacity) Bama Theatre opened its doors on April 12, 1938 with Bobby Breen In “Hawaii Calls” along with performances by the University “Million Dollar Band” and a double quartette by a nearby glee club. I’m not sure if a newsreel or cartoon was added too, but the hunt still continues.