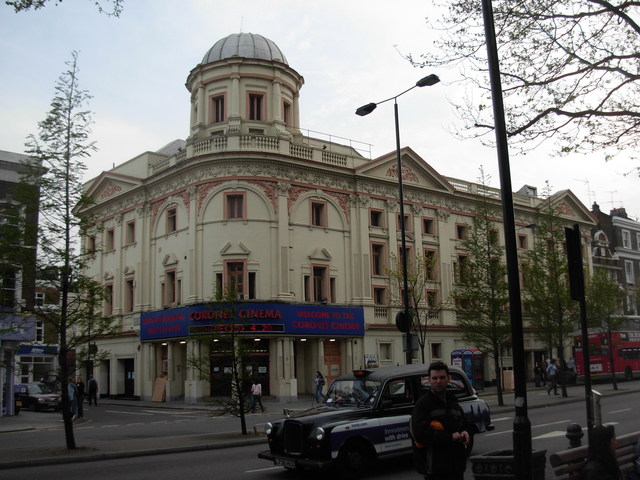 Located in the west London inner-city district of Notting Hill. Opened as the Coronet Theatre (a playhouse) in 1898 with 1,143 seats located in stalls, balcony and gallery. It went over to screening films full time in 1923 and the boxes on each side of the proscenium were removed. In 1931 it was taken over by Gaumont British Theatres/Provincial Cinematograph Theatres(PCT) and re-opened on 17th August 1931 with 1,010 seats.

It was re-named Gaumont Theatre in 1950 and continued through to 1977 playing the Gaumont and Rank releases. It was taken over by the independent operator Panton Films from 27th February 1977 and re-named Coronet Cinema, with a reduced seating capacity of 399, using the stalls and balcony seating areas only.

The main original auditorium remained virtually intact. A second screen with 151 seats was erected on the stage in 2002. The main original auditorium then had a seating capacity of 380, with 220 in the stalls and 160 in the balcony(the gallery has been unused since it converted to a cinema in 1923). In May 2004 the Coronet Cinema was purchased by a church, but remained open as a cinema.

The church sold the building in May 2014, and the Coronet Cinema closed on Thursday 29th May 2014 with “X-Men:Days of Futures Past” showing in the main original auditorium and “The Grand Budapest Hotel” and “American Hustle” showing in screen 2 on the former stage. However, this cinema remained open for two more weeks, and closed on Thursday 12th June 2014. It was the last cinema in London to operate 35mm projectors.

The Coronet Cinema was sold to the Print Room Theatre who had outgrown their Westbourne Grove home. Local architecture firm Studio Indigo formulated plans to renovate and restore the building including reopening the original auditorium as a playhouse, but also as a cinema in the future. The screen 2 on the former stage was converted into a small live theatre space and opened 16th March 2015. The original main auditorium was renovated and a stage was built in the void in front of the dress circle. The rear stalls area was converted into a bar. The Coronet Theatre is a Grade II Listed building.

I was assistant manager here from 1972 till 1972 with Tony Portch as manager. I fell in love with the place the first time I walked in for my interview with Tony.

Together with a group of friends, I attended a late night show at the Gaumont one Saturday evening in the early ‘70s. The programme was an Astaire/Rodgers double bill of “Top Hat” and “Swing Time” and the atmosphere in those theatrical surroundings was fantastic. My group were not able to get seats together and, shortly after we took our seats, people were being turned away. After every musical number, enthusiastic applause rang out and a very happy crowd emerged to wend their ways home in the early hours. Following the double bill’s success here, Rank’s Booking Dept. was instructed to only arrange such screenings of one film or the other as it was felt that, in the right locations, each of the films would do well on its own. Thus two profitable shows could be had. Tills, or rather Automaticket machines, would ring merrily and I can’t imagine the films would have cost much to hire. When managing the Odeon, Stockton-On-Tees, I showed “A Hard Day’s Night” and “Help!” as a late night double bill in 1970 – United Artists charged Rank £14.7s.6d for the films (£14.37) and we sold over 700 tickets. I digress!

To Sharkbites. I have just read your long ago blurb. Having been a projectionist of 35mm with 2000" reels and carbon Arc. I don’t know where you are but we never had Projectomaticin any place I worked. We never had an Ice Cream lady' we had to get up and go to the concession stand. Finall, where dis idea of waxing th`e prints come from, we just made sure we had clean aperatures and the rest took care of it self But I never heard of waxing. I am in Boston' Mass and did all my projection work 16mm, 35mm and interlock systems.

The seats in the rear stalls beneath the dress circle have been removed and while retaining the original wooden sloping floor, that area is now a bar, with black masking cloth covering the newly installed scaffold supporting the stage. The dressing rooms have been brought back into use after being locked up and derelict for 90 years. Films ‘may’ return to the building in the future, but if this happens it will probably be one off special screenings and not daily cinema use. As it is a Grade II Listed building, any alterations/additions that have been made are removable.

Thanks Ken, just a few more details. From your description this would indicate more a platform rather than a conventional stage. I imagine there is no proscenium, fly-tower or wing space with this configuration. Additionally, I imagine the original proscenium is no longer visible, which would be such a shame. Fond memories of seeing Gone With The Wind here in the 70’s.

The ‘stage’ is quite large, but it is an ‘open’ stage with no wing space, proscenium or flytower. The upper section of the original proscenium is visible at the rear of the ‘stage’, partially hidden by a theatre set for the production that was on when I visited.