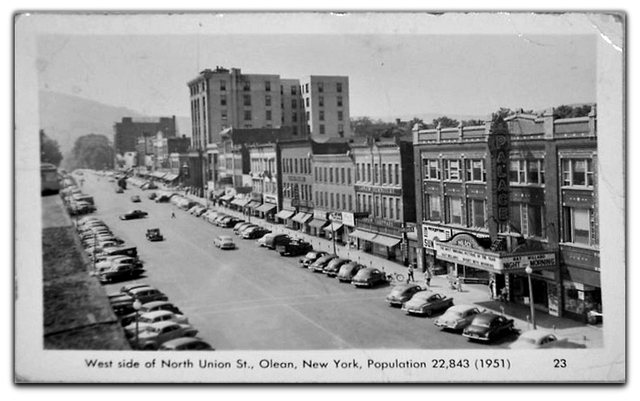 This website has a few photos of the Palace and other Olean area theaters: http://northoleanhistory.com/

Someone has posted 3D computer rendered animation of the Palace building here: http://www.youtube.com/watch?v=trOeY0a5ytM I would assume this is related to the ‘Little Chicago’ movie which has been filming in the area.

I grew up in Olean and my first memory of seeing a movie in a theater (Star Wars) was at the Palace. The place had definitely seen better days even back in the 70’s. As I recall it was kind of dim and dirty inside but you could tell that it was quite impressive in its day. When the film ended a curtain would close across the screen as the credits rolled. There was a balcony but it was normally closed off – I only remember it being opened once for a movie when a free showing of “Charlotte’s Web” played to a large crowd on a weekend afternoon.

At some point in the ‘80’s a local theater group convinced the owners to allow a play to be staged there. I believe that some level of restoration work was done by volunteers prior to the play. I remember sitting in the balcony for a performance and marveling at the restored chandelier. Hopefully somebody got some interior shots at that time – I never saw it in better condition. The last time I went was to see JFK and the place was back to being dimly lit, unclean and freezing cold.

I still cringe when I go home to visit and see the building that replaced it on Union Street. The Palace sign will always be lit in my mind’s eye.

I was part of the group, The Olean Community Theatre, that staged the play in July of 1989 to which redwards referred. The musical was “Man of La Mancha,” and I played the lead role. It was marvelous to be a part of fixing the place up and watching the shine come back to the Palace through the efforts of many volunteers. There was even one volunteer who personally cleaned every seat.

One day when we were rehearsing, a former stage hand (from when the Palace was a vaudeville house) stopped by and told us stories about the various artists who had played the Palace. One interesting story was when Roy Rogers and Trigger were there and Trigger got cut in an accident that left a scar on Trigger.

The stage hand also told us a story which I used in my performances. Every night when I sang “The Impossible Dream” I stood on a trap door that he had pointed out to us which had been installed by Harry Houdini. It was my hope, while singing that song, that the Olean Community Theatre’s dream of making the Palace into a community performing arts center would come to fruition. Unfortunately, there were too many windmills to fight.

From 1951 a photo postcard image the Palace Theatre in Olean NY.

Hi there – anyone who gets this. My grandfather and great uncle owned and ran the Palace for decades. I’m trying to get ahold of any artifacts / original photos / postcards etc. My cousins and I used to visit the theater nearly every day in the summer as kids and I’d love to have something to share with them from the past. If anyone has anything they’d be willing to share with me, please let me know. Post here and I’ll get an email about it. Many, many thanks.

I recently purchased theater seats that were said to be taken out of the palace theater before its demolition. I am trying to confirm their age and if they are in fact from the palace but its difficult to find any images of the inside of the building.

the seats may also be from the Olean Theatre found on the 400 block of North Union St. pictures and info on theater would be much appreciated

This story from the Olean Times Herald of October 10, 2015, concerns the Palace Theatre’s vertical sign which was saved from the demolition and has since been in storage.

The article says that the Palace opened on February 19, 1917.