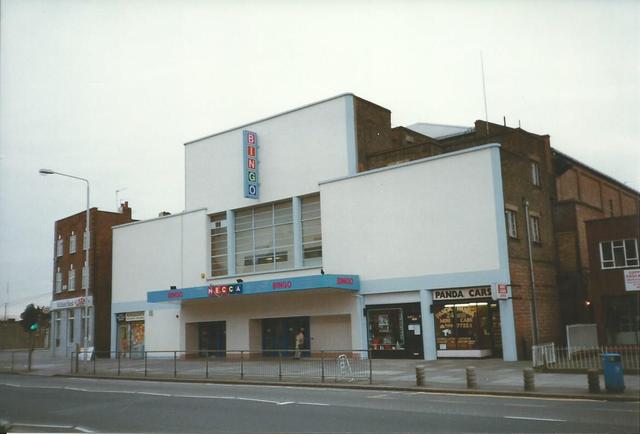 The Embassy Cinema in Chadwell Heath, Essex (in the east of today’s Greater London), was opened on the 17th May 1934 by the Mayor of Ilford, Alderman B.S.J. Pitt. It was known as a ‘Super Cinema’ as it also incorporated theatre, staging live variety shows and organ performances. It featured a tea lounge and an artistic café, as well as a ballroom for dancing to the sound of a live orchestra; this brought much style and elegance to the residents of Redbridge, Barking & Dagenham and Havering. The cinema offered 1,812 seats to the public: 1,232 in the stalls and 580 in the circle. A number of local newspapers, at the time, cited it a “the last word in splendour and comfort”.

It was designed and part-owned by the architect Harry Weston and the D.J. James Circuit, and was the second of eight cinemas he is known to have designed. He had previously designed the Plaza Cinema, Worthing in 1933. and went on to design another six cinemas in the 1930’s, mostly for the Gaumont British Picture Corporation. The Managing Directors of the Embassy Cinema were Charles A. Sinden & Mr P. Lyons, as well as the Secretary of Embassy (Chadwell Heath) Ltd, Mr R. Teppett, played instrumental roles in the creation of the cinema. The construction of the building began in mid-December 1933, with the majority of it being completed within only twenty-two weeks.

Harry Weston designed the Embassy Cinema in a more lavish style than would have been usual for an independent cinema. Its façade had quite a Modernist horizontal emphasis, faced with cream/biscuit coloured faience tiling above and black faience tiles below (today all these have been rendered over), with chromium plated fittings, enhanced by neon strip lighting and illuminated signs at night. There is a large window over the entrance which allows light into the ballroom. The lavish double-height entrance foyer featured wonderful Art Deco style metalwork and a floodlit glass column of crystalline rods. The auditorium originally had a ‘saucered’ floor to improve sight-lines from the seats. The splay walls featured Streamline Moderne style horizontal fins which extended across decorative panels and grillwork, leading towards the proscenium arch which was backlit from the rim.

Upon declaring the cinema to be open, Alderman Pitt professed to the public that he considered the building to be a “wonderful contribution to the corporate life of the Borough. One could see films depicting re-happenings of today which in the ordinary way one could only read about, could be shown the humorous side of life or sometimes historical, or, on the other hand, stories depicting pathos and tragedy”. The Mayor then jovially remarked “The cinema today is part of the people, a place where they receive pleasure, instruction and education, and in this case they will receive it in ideal conditions. In my humble opinion, in spite of all the criticism which one hears, the cinema is undoubtedly assisting in the uplifting of the masses. Another important factor was the growth of the British film industry which, by its success, had given employment to hundreds of British subjects, as well as increasing the spending capacity of the nation. I hope and trust that British films will continue to flourish, and with success, such improvements will be made that they may command the British market, in order that we get rid of those films which give you American slang!”

“A Short Story About the Embassy”, a history of the cinema produced by Lyons, was one of the first films to be shown on the opening night. It was an amusing short film which featured the construction of the building sped-up, and was enthusiastically received. The programme was continued with a Mickey Mouse Disney cartoon “Fury of the Jungle” and the feature film “Broadway Through a Keyhole” starring Constance Cummings & Russ Columbo. A short recital by Terence Dene, resident organist, on the Compton 3Manual/8Ranks theatre organ, showed off the unusual feature of this particular instrument which had an illuminated console with an illuminated ‘peacock’ fan attached to the rear of the console. Variety performances were interspersed throughout the opening night performance.

Alderman Pitt congratulated Harry Weston very sincerely, for designing the building, the contractors, Dorman, Long & Co. Ltd. and Andrews Gibbs Builders Ltd. for the excellence of their work, Sinden & Lyons, for their business foresight and enterprise. He then thanks them on behalf of the public living in the area for the outstanding provision they had made. Cheques worth thirty guineas & ten guineas were handed to the Mayor, for the King George Hospital and the Ilford Tuberculosis Care Association respectively, by the proprietors of the Embassy Cinema. The Mayor stated that this generous act demonstrated that Sinden & Lyons were prepared to accept their share of the responsibilities which faced the burgesses, and trusted that their venture would realise all their expectations. Lyons believed that the cinema would meet the needs of a very rapidly growing locality. He stated to local reporters in an interview with the Dagenham Post, that “in his opinion, British films, of which he had many booked, would become an important an industry as they were in the United States”.

The stage was 24ft deep, there were four dressing rooms and variety shows were staged as part of the programme for several years. The Embassy Cinema boasted a large car park which had its own covered entrance/exit directly from the cinema building.

Within five months of opening it was taken over by Gaumont/PCT Theatres and immediately re-named Gaumont Palace Theatre from 19th October 1934.

It was re-named Gaumont Theatre from 1937 and continued under Gaumont British management and later into the Rank Organisation. They re-named it the Odeon Cinema from 24th February 1964, but this did not last long as it closed as a cinema on 28th July 1966 with James Garner in “Duel at Diablo” and Bob Hope in “Boy, Did I Get A Wrong Number”.

On 18th August 1966 it was converted into a Top Rank Bingo Club, later operating as a Mecca Bingo Club, which closed in June 2014. It was refurbished and re-opened as a banquet hall known as the Mayfair Venue in December 2015. (The name Mayfair was originally the name of the now demolished Odeon, Whalebone Lane in Chadwell Heath).

On 8th August 2017, the Chadwell Heath South Residents' Association successfully listed the former Embassy Cinema as an Asset of Community Value. The local community group then proceeded to launch “The Embassy Cinema Restoration Project”, with the aim of acquiring the building and restoring it back into a repertory cinema, that can incorporate theatre, live music & dance. A single-screen experience for old classic movies, cult films and arthouse productions, all in a variety of formats (from 16mm, 35mm & 70mm, to Super 8 and 4K) and housed in a vintage Art Deco/Streamline Moderne setting.

The Chadwell Heath South Residents' Association have ambitious plans to make the Embassy Cinema one of London’s finest Art Deco experiences; the catalyst which results in a rejuvenation of the surrounding area, that can have a lasting impact for generations.

The Mayfair Venue in association with the Chadwell Heath South Residents' Association will screen its first film since closing as the Odeon in July 1966 when Leonardo De Caprio in “Titanic” will be shown on 10th February 2018.

A set of interior photographs as a bingo club in 1987:
View link

This cinema/bingo hall closed in June 2014. Fate of building as yet unknown.

Google StreetView has been inside the Mayfair and the pictures are excellent. Go to [www.google.co.uk/maps] and search for “Mayfair Chadwell” then drag the orange man to the street or the blue circles on the building.