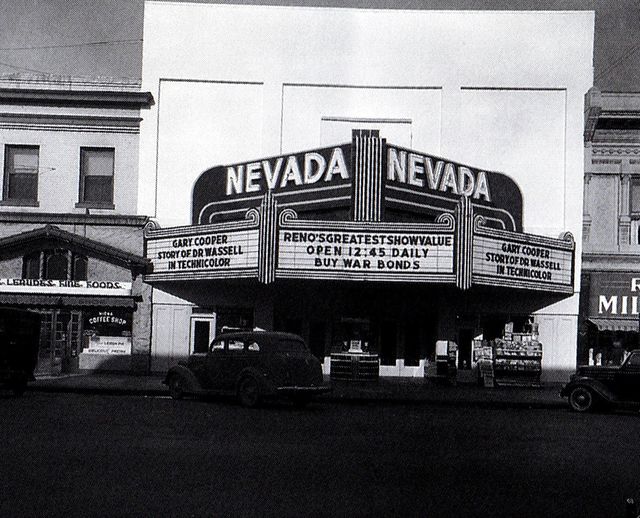 Originally opened as the Wigwam Theater around 1909, it was operated by the T & D Jr. Enterprises chain out of San Francisco, CA by 1938. Renamed the Nevada Theater during the 1940’s. It was located on Second Street between Sierra Street and Virginia Street. In 1948, it was remodeled and renamed Crest Theater. The theater was closed in 1959 and has since been demolished.

Yes, the Boxoffice article confirms 1948 as the year the Nevada became the Crest. It was apparently called the Nevada for less than six full years, as the 1942 article said it had been the Wigwam before that year’s remodeling. I can’t find any earlier references to the Wigwam, so I don’t know how old it was when it became the Nevada.

One 1948 Boxoffice issue included an architects rendering of the remodeled Crest, but didn’t give the architect’s name. It was most likely done in-house by Fox, which means the lead architect would almost certainly have been Carl G. Moeller, who handled most of Fox’s designs during the Skouras era. In the pictures it certainly looks like his work.

Such a nice little theatre, as few seats as it had, compared to larger downtown Reno theatres,ie Majestic at 1st & Center and the Granada on 1st St. the Crest was always the “big hit” house. It most certainly was re-done by Carl G. Moeller. It definetly had his style of the typical Skouras Fox house of the time. The Skouras-ized theatre will always be my favorite.

One thing I wonder about is the original name of Wigwam because on the corner of 2nd & Sierra St. was a Wigwam Coffee Shop which at the time was a chain of restaurants in the Nevada area. I wonder if there was a connection between the two in regards to ownership.

Before my time, there was also a TOWER THEATRE in the south Virginia St. area, I am not sure exactly where that was. I do remember the MIDWAY DRIVE_IN where Peppermill Hotel Casino now sits, on So. Virginia St.

I can only remember going to the TOWER THEATRE once — the summer of ‘56. And then it was gone. Seems to me it was near the Riverside Hotel on South Virginia, maybe a block North on the other side of the street. I think I remember it being a somewhat “lower class” theatre.

Thanks for reminding me of the MIDWAY DRIVE-IN — getting smuggled in with my cousin in the trunk, trying to stay awake for the dusk-to-dawn shows. Happy days.
Jock

Correction to above location…..

The Tower Theatre was located on Virginia St. between Liberty St. and Pine St. The Pioneer Center is located at Virgnia St. and State St. A huge Wells Fargo Bank building sits where the Tower Theatre would have been. Sorry for the error.

First of all the Nevada Theater was not operating into the seventies. I first arrived in Reno in the fall of 1950 and the operating theaters were: Granada, Majestic, Tower, and the tiny Crest next to the Wigwam Coffee Shop. I had heard of the Victory Theater through a friend and if memory serves me correctly she said it was inside what was (in 1950) a small arcade of retail shops on North Virginia Street just north of East First Street. There were also two drive-ins, the Midway on South Virginia Street and the El Rancho in Sparks. She also told me that the Wigwam Theater was much bigger than the Crest but when remodeled some of the space was given to the Emporium Music Store behind it which resulted in a much smaller Crest Theater.

I believe I went to the Crest theater to watch Earthquake in the winter 1974 and it was in Sensurround.

The November 23, 1994, issue of the Mineral County Independent-News, published at Hawthorne, Nevada, had a column prepared by the Nevada Historical Society which gave a brief biography of a Nevada pioneer named Henry Anderson. It says that “…he built the Wigwam Theatre Block on Second Street in downtown Reno in 1908-09….”

The Wigwam Theatre in Reno is mentioned in the February 13, 1910, issue of The San Francisco Call. At that time it was presenting live performances.

Here is a photo of the Wigwam Theatre which the University of Nevada dates to the period 1930-1948, but I think it’s more likely from 1924, the year the movie the stagecoach parked out front is promoting, The Iron Horse, was released.

1944 photo as the Nevada Theater added courtesy of Stephen Gennerich‎.

The Wigwam theatre had a lot of live shows— plays, vaudeville, etc. At some point it added movies. The photograph here promotes the showing at the Wigwam of The Iron Horse, a John Ford movie. It was filmed in part near Reno, in Wadsworth to the east and Truckee to the West. The Crest was a Fox theatre and well known in town as the most expensive movie theatre. It was avoided unless there was something there that HAD to be seen, such as Elvis in Love Me Tender (I saw it and heard the screaming) or, much later, The Exorcist. I also recall seeing the original The Fly and (for some reason this forgotten teen flick sticks in my mind) A Swinging Summer. Downstairs there were the remains of what appeared to be a coatroom from the days when people checked their coats before the show. I note that the “Closed” icon at the top of this page is highlighted, but the “Demolished” icon is not. The Crest is gone. The Money Tree casino was built on the site and was always troubled and closed. It later became a night club but now stands empty.

According to researcher Debbie Hinman, the Tower theatre last appeared in a Reno city directory in 1959. As Larry Goldsmith correctly notes, it was located between Pine and Liberty streets. To narrow it down still further, it was located between Pine and Ryland Streets. I recall seeing King and I at the Tower, and wanting to see but missing Tom Thumb. It was a very popular theatre. My brother recalls, “Tower had a deep lobby, the length of the bowling lanes which was next door.” It was very community based— children could get in with milk bottle tops on Saturdays, paintings by a couple of students at the Stewart Indian School were exhibited, that kind of thing. But the theatre was best known for something else. At the end of certain rows, there was one seat that was a seat and a half. These were highly favored by teen couples.