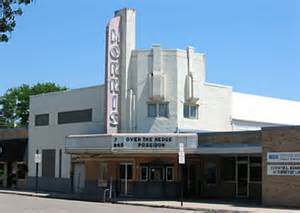 The Morris Theatre (please note correct spelling) has a new web page which can be found at: http://www.morristheatre.net where you can read about all the latest developments and progress on renovation as it comes under new ownership.

The architect for this theatre was B.J. Benfield.

There is a small photo on this page:
http://tinyurl.com/49f8mf

This theater plans to add screens and make other needed improvements: View link

Do they really have to add screens? I can answer that myself.

Yes,you are right,sadly,I live way too much in another time concerning Movie theatres.

I can find no evidence that B. J. Benfield was actually trained as an architect. In fact Benfield (or Benefield, as his name was usually spelled in the Film Daily Yearbook) was the owner of the Morris Theatre, and had previously owned the Strand and Orpheum Theatres in Morris as well as several theaters in other small Minnesota towns. It’s quite possible that he designed the Morris Theatre, as exhibitors did occasionally design theaters for themselves, but he probably had to have hired a licensed architect or engineer to draw up the plans.

Google Maps provides no street view for the Morris Theatre’s location, but Bing Maps has a decent Bird’s Eye View.