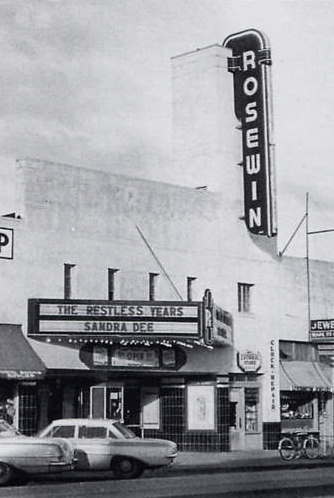 The Rosewin Theater was opened by “Mac” McHenry in 1922 at Jefferson Avenue and Tyler Street in Dallas' Oak Cliff section. It replaced the Bluebird Theater which was located around the corner on Tyler Street.

“The Little Minister”, starring Alice Calhoun, was the first feature to open the Rosewin Theater. The theater was renamed the Rex Theater and featured adult films in its last years. It was closed in the early-1970’s and later demolished.

some sort of construction is happening right now on this lot which has been empty for quite some time. up until a few days ago the original box office tile was there still.
View link

Ahh memories! The tiny store to the right of the theater (where the bicycle is parked) was the location of my grandfather’s candy store in the 1930’s and 1940’s. His name was Charles Frensley. I read in another blog where it was referred to as Mr. Friendly’s Candy Store. As a young boy (7-9 yrs old?), I would catch the street car and report to the store to help my grandfather for the Saturday kids crowd. He had an agreement with the Rosewin that they would only only sell popcorn and leave the candy to him. Movie ticket holders were free to pass out of the theater and go to his candy store and then come back in. Most of our candy was of the penny variety so you could mix and match stuff and really stretch your money across lots of different stuff. I don’t remember if I was allowed to sample the wares. Probably not. :–)

This theatre in the sixties was renamed the Rex; I worked as a projectionist in the early seventies when it was a triple-XXX theatre. It closed not long after that. The booth was up a long flight of stairs which also led to the restrooms!

The Rosewin opened In July of 1922 for C.R. McHenry, manager of the Oak Cliff Amusement Company with “The Little Minister.” The theater had a Wicks Organ, had a room to take crying babies but still see the movie, and would be expanded in seat count twice as it enjoyed large crowds. In 1929, it became the second suburban theater to offer sound adding Royal Amplitone sound-on-disk and its first feature was “The Barker” on May 12, 1929. In a promotional stunt, McHenry released live turkeys at Thanksgiving time with a catchers-keepers rule.

McHenry joined forces with The Robb & Rowley Circuit and in 1931, the Rosewin was in the Howard Hughes and Harold Franklin owned Hughes-Franklin portfolio. In January of 1932, that circuit disbanded it Southwest operation with the theaters going back to Robb & Rowley. The theater had screenings for the poor and when the Tyler St. United Methodist Church was padlocked for non-payment, the Rosewin opened their doors to the church until they could find a new home. In 1934, McHenry sold his interest in the 12-year old Rosewin along with his Midway and Texas theater to the Robb & Rowley Circuit in June of 1934.

The Rosewin was closed for five months in 1939, updated by R&R for $40,000 including a refresh of the exterior, new pitched floor, higher roof, and new decorations. The new count of the seats went from 991 to 825. The first feature was “Sprit of Culver.” The higher roofline likely extended the theater’s life because in 1953, the Rosewin became part of the widescreen movement getting a variable aspect screen to project 1.85:1 and 1.66:1. In 1955, CinemaScope equipment was added to the Rosewin. After 41 years, Rowley United dropped the Rosewin in early November 1963 closing with “That Touch of Mink” and “Young Guns of Texas.”

Under independent operation, the The Rosewin became the Rex Cinema in 1964. This was Dallas’ second Rex Theater with a silent era theater that did business from 1920-1927 in two different locations. The first was at 1510 Elm (owners: 1916-1920 Leon S. Gohlman and 1920-4 R.J. Littlefield). The second address was 1711 Live Oak (owners: 1924-5 Rex Amusement Co. and 1925-7 I. Wyll). The former Rosewin then Rex opened on March 6, 1964 with new sound, seats and decorations opening as an art house with the film, “The Cardinal.” The art concept was tried for two years but the theater mixed in some adult X-rated films and the audiences came. As a result, the art film policy changed to adult films and while extending the life of the theater, trouble soon followed.

The theater began to experience raids arresting the Rex’s projectionist and ticket taker on Feb. 19, 1968. In 1969, the Cathedral of Compassion had a petition and protested the Rex Theater. As the legal problems occurred, the theater added a screening room and became known as and advertised as: the New Studio Arts Cinema, the Studio, the Rex-Studio, then by the end was back simply to The Rex. In 1971, the manager of the Studio Arts theater was arrested for showing pornographic films. The Rex finally closed at the end of 1976 when enforcement of rules with new teeth altered the adult theater industry in Dallas. 12 theaters were essentially zoned out of the adult exhibition business. The Rex closed with the triple feature of “Resurrection of Eve,” “Deep Throat,” and “Devil in Miss Jones.” For an adult theater, that’s going out with style though ending a 54-year exhibition history for the theater which would later be demolished.

This 1969 news story from WFAA shows a religious group protesting adult films at The Rex. https://youtu.be/jP805s4jay4