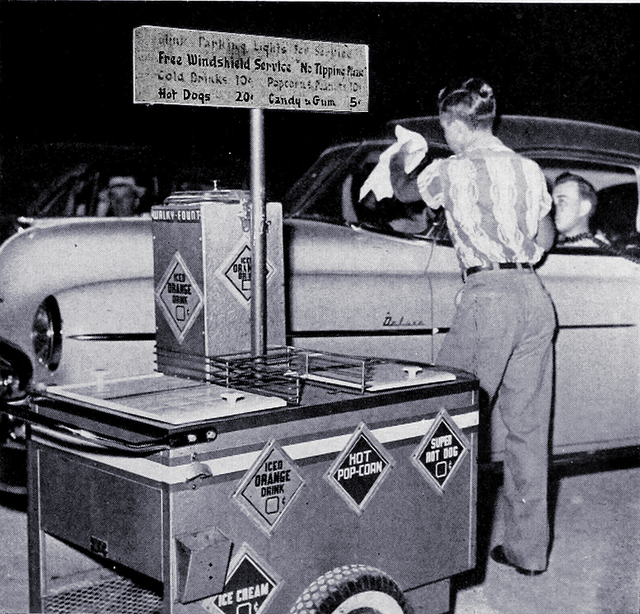 I read that the Trail Drive In opened in 1955 and closed in 1975. I got this information from www.cinematour.com

Also, www.metroactive.com/papers/metro/06.06.96/drive-in-9623.html, reports that “photographer John Margolies called his 1981 photo-essay on drive-ins The End of the Trail. One of his subjects was The Trail, a Texas drive-in theater pictured in an advanced state of decay.” I don’t know if this is the same drive-in on Old Spanish Trail, but it might be worth checking into. Hope this helps.

HOUSTON, TEX-The 1,000 car Trail Drive-In on Old Spanish Trail here recently was opened by the Farr Amusement Co. The 50x60 foot screen is one of the largest in this area, according to Jack Farr, manager.

Billed as “Texas' largest”, the Trail Drive-In’s grand opening was at 7:00 p.m. on April 21, 1950. A “giant fireworks show” was to be held in conjunction. Advertised capacity was 1000 cars. The premier feature was “Tulsa” with Susan Hayward and Robert Preston. Kids under 12 were admitted free with their parents.

My Grandfather, Jack Farr Sr. owned and operated the Trail Drive-In. My Dad and Uncle, Jack and Eddie Farr worked at the drive-in. They always referred to it as “The Old Spanish Trail Drive-In Theater”. We still have autographed pictures of movie stars such as Ronald Regan, Jane Mansfeild, Maraland Monroe, etc from the theater. My dad,Eddie Farr’s fondest memory of the theater was when he had to drive his car to Hobby Airport to pick up Roy Rodgers.

A 1973 aerial photo shows the Trail Drive-In closed and ready for demolition. While the screen is still up, most of the ramps, the projection booth/concession stand are gone in preparation for HWY 288 which now goes through the property.

So, if the year is right, the Trail closed well before 1975.

Houston, Tex. – The fireworks display marking the grand opening of the Trail Drive-In recently caused more of a stir among residents than owner Jack A. Farr anticipated. Many people, apparently jittery over talk of flying saucers, swamped switchboards at the Houston Post and police station with frantic calls about explosions.

The fireworks display lasted from 9:14 to 9:47. Farr also had put up an artificial moon on a 100-foot pole. The green and amber lights that normally blend into artificial moonlight gave spectators a thrill.

Farr said the display was completely legal as he had obtained permission from the fire marshal. He was surprised that the display startled anybody because he had run newspaper ads announcing the opening of the Trail and the fireworks display. The Trail is located at 3201 Old Spanish Trail and accommodates 1,004 cars.