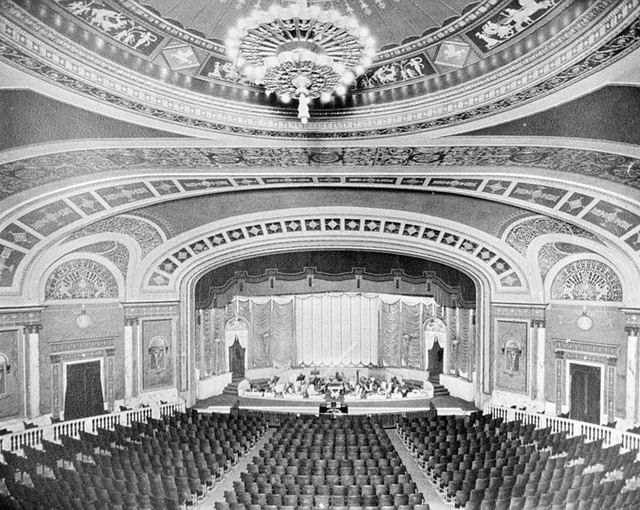 The Palace Theatre (the 3rd on Elm Street with this name) opened on June 11, 1921 with Gareth Hughes in “Sentimental Tommy”. Initially an independent theatre, it was taken over by Paramount-Publix Theatres in 1927 and then by Interstate Theatres Inc. in 1930. By 1941 it was operated by Paramount Pictures Inc. through their subsidiary Hoblitzelle & O'Donnell.

To many, this was the pride of theatre row on Elm Street in Dallas. It had a domed ceiling, a great stage, a real elevator orchestra pit and a magnificent Wurlitzer 3 manual, 11 rank, model 235 opus 411 organ which was opened by organist Carl Weismann. This was replaced when a Publix #1 opus 2125, 4 manual, 20 rank Wurlitzer was purchased on August 16, 1930. The organ console was mounted in the pit and would rise up between movies and be played until the next show.

The Palace Theatre was closed on December 3, 1970 with Anthony Quinn in “Flap” (aka “The Last Warrior) and was immediately demolished on December 14, 1970 and was replaced by an office tower.

My dad built houses in the 70’s and had a man that would supply him with salvaged brick from time to time. When the Palace was torn down the man called my dad and told him about the brick. My dad purchased the brick and it was used for a house in Rockwall, TX on Lakeshore Dr. I know which house it is and have stopped by and mentioned it to the owners. They are not the original owners but said that the lady that bought the house new said it was from a building in Dallas but they didn’t know if it was true. I told them it was and it was actually from the Palace Theatre.

From the 1930s a postcard view of the Palace Theatre on Theater Row in Dallas.

Here’s a link to a discussion thread on the dallasmetropolis forum in which forum member Dismuke has posted scans of his program from opening night at the Palace, June 11, 1921. The Artwork depicting the theatre’s interior and architectural features will probably prove to be the first time since your last visit to the theatre that you have seen these views.

So great having the above post! Carl Wiesmann was the organist at first but then many others played the magnificient second Wurlitzer Publix #1 a 4 manual/20 rank organ. That console is now with Dick Taylor in California along with some of the relay boards & switchboards. He is building a small museum to house it altho' it is just the console. The rest of that organ (ranks of pipes, blower, generator, etc.) is installed in the Fox Theater in San Jose, CA. Good to know. You can visit that theater’s website for more info. Thanks again for the fine post and detailed history of the Palace Theater.

Many concepts within the design are attributed to S.L. “Roxy” Rothafel who patterned his ideas from the Rialto and Rivoli in New York including a small inner proscenium for the screen and an outer frame for a symphony orchestra. And to make sure people knew the theater cost a million bucks, the theater painted the phrase on top of the theater and placed it in early ads for Palace shows. Movie star Bebe Daniels was on hand March 2, 1921 for the laying of the building’s cornerstone. Its seating capacity of 3,000 would house the entire capacity of the Queen, Hippodrome, and Old Mill Theater combined. Its architecture was said to be of the Adam Design with its Roman Pantheon inspired columns and frieze around its dome. Tennessee gray marble and Gray McMullen marble were liberally utilized along with white and yellow terrazzo flooring as nice touches. Bathed in cream, browns, blues and golds, the theater had an opulent feel. An art gallery was just up the stairways which, themselves were marble with bronze bannisters. Historical periods were carried out in the Pantheon frieze work in the mezzanine while rest rooms were in the marble balcony with marble, fumed oak, and open fireplaces and mantels. Medallion lighting fixtures from the ceiling producing lighting effects. All seats were upholstered with air cushion spring bottoms, nineteen inches wide. And the views were unobstructed by posts as the theater was post-free.

The promised 40-piece Palace Orchestra was reduced to a 30-member group the outset but led by D.W. Griffith staff conductor Don Albert. The $50,000 Hope-Jones pipe organ was huge and featured a quartet of reed, stringed and brass instruments including seven violins, violas, oboes, bassoons, clarinets, cornets, trombones, harp, piano, and kettle drums. Coming just two months after The Majestic’s much-heralded opening, the theater had to deliver the goods. Along with the theater amenities was a staff of 66. Point made Southern Enterprises. As for projection, the projection was from a crow’s nest in the back wall of the balcony, a 136 foot throw from projection window to screen: one of the longest in the South. It would be home to Paramount and Realart films.

The theater opened Jun 11, 1921 with “Sentimental Tommy” with Carl Weisemann showing of the organ. WFAA broadcast from the theater. The fireproof construction turned out to be a saving grace as the neighboring Carreaud Bakery threatened to destroy the Palace in 1922. However, the building held up with $20,000 damage mostly due to water used to extinguish the bakery fire. Another fire in a neighboring business in 1923 caused an evacuation but no damage. A special booth was constructed called the “non-synch” room which was a double turntable for recordings to non-synchronized silent films. It was said to be outside the jurisdiction of the musicians union and thus could be operated with violating the musicians contract.

On March 13, 1926, Publix Theaters left the Melba and took control of Southern Enterprises and the Palace. Its first moves was to lower the orchestra into the pit and bring “New York produced shows” to the Palace. The Palace received a $200,000 makeover beginning in July of 1928 designed by George C. Perkins under Publix for its stage shows. The theater decided to put a lot more into the stage show presences while others were putting their capitol into sound systems. New dressing rooms, a counterweight rigging system for faster set set-up and striking, and glow system of illumination for lighting effects inside the auditorium along with a vastly expanded lobby and much larger outdoor sign – the largest in the South reportedly – among the changes. An improved organ with additional pipes and reeds for fuller presentations was added. The theater would be wired for Movietone sound for its ninth year of operation and Vitaphone, as well. The theater was renamed the Greater Palace, its official name at its grand re-opening that was four months behind schedule on January 11, 1929. In the talking picture era, Norma Shearer’s “Smilin’ Through’ played to 10,500 patrons in a single day which was impressive for 1932.

In 1934, the Interstate Theater Circuit took on the Palace and operated until its closure in 1970. In its thirtieth anniversary, changes which came in time for its 31st birthday included moving rest rooms to the main floor, a new color scheme in the recarpeting of the theater, Eugene Gilboe decorative murals, and wider seating reduced the overall count to 2,300. Between the 30th and 31st birthday, however, projectionist and former president of the projectionist’s union Julius J. Schaeffer – who worked at the Palace since 1921 – died at work. Schaeffer would miss the installation of wider angle screens put in in the form of Cinemascope in June of 1953 for demonstrations along with The Robe – Dallas’ first Cinemascope picture opening Sept. 24th of that year, the stage space was greatly reduced leading to fewer wide scale live events. However, the impressive 54'x22’ Cinemascope screen was the first in Dallas. 30,000 people saw The Robe that first week and it set a record for attendance that stood for years. That film was followed by the successful How to Marry a Millionaire.

The Palace fell victim to the growth of the Central Zone in Dallas which got a lot of the major films. Attendance dwindled and when the Palace’s lease expired in December of 1970, Interstate made no efforts to re-up. The theater closed December 3d and was sold and demolished. The final film, “Flap” was a forgettable choice and the decision to bulldoze the building a regrettable error despite eventually being replaced by the venerable Thanksgiving Tower. Sadly, the Palace was no more.