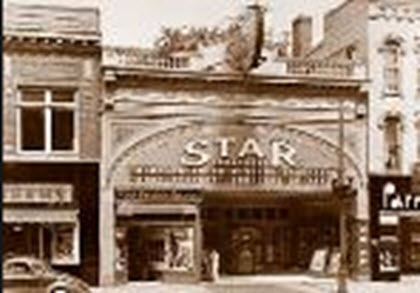 The Nickle Theatre was opened in 1908, a conversion of a café. It was renamed Star Theatre when Mr. N. Kornblight, proprietor of the Star Theatre was in New York a few days ago looking for features for his new house. The Star Theatre has been remodelled and is now showing pictures to large audiences every day. Mr. Kornblight says that Binghamton will soon have several first class houses, but he does not greatly fear competition. It was closed and demolished in 1913, and a new Star Theatre was built on the site, designed by architect Sanford O. Lacey and opening October 20, 1913.

Taken over by Comerford Theaters, they closed the Star Theatre July 1, 1951. It became a parking garage. It was demolished by 1966.

An essay at this web page is primarily about the Strand Theatre, but also has some information about the Star.

The Star Theatre opened on October 20, 1913. It was the second theater of that name to operate on this site, the first having been converted from a storefront cafe in 1908. The house was originally called the Nickle Theater, but operator Ned Kornblite soon renamed it the Star. It was the first regular movie theater in Binghamton.

The 1913 building that replaced it was designed by architect Sanford O. Lacey, who had also designed the Stone Opera House (later called the Riviera Theatre) a few doors down the block. In 1920, Kornblite built the Strand Theatre on a lot next door to the Opera House. He continued to operate both the Star and the Strand until 1935, when he sold them to Comerford Theatres.

The Strand and the Riviera are still standing, though in a sorry state of decay, but the Star Theatre was demolished some time before 1966.

Closed July 1, 1951 (as was the Regus, both in the Comerford Chain). The Press on June 17, 1951 ran a humorous (but respectful) story about its closure in western dialect (apparently the Star was the go-to for kids to see westerns at the time it closed doors). There is a photo of pictures waiting in line in front of the Star…good view of the ticket counter and poster enclosure.

Star Theatre was converted to a parking garage in the `50s, photo as such added. It was torn down in August 1960.