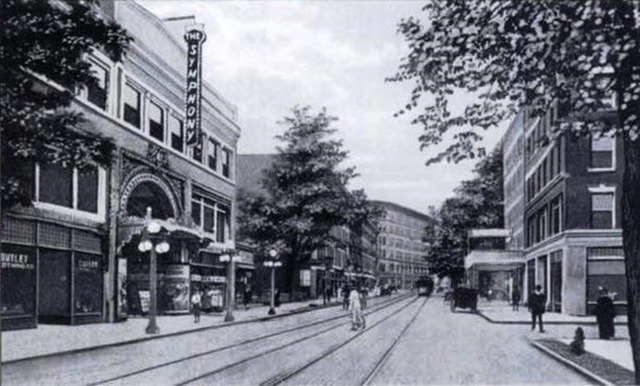 The New Symphony Theater was opened on November 22, 1913. It was closed in 1953. By 2021 the auditorium had been demolished and the front of the building was in use as a restaurant.

Opened Nov. 22, 1913. Closed March 25, 1950. Reopened March 1952 after a remodeling, but after a very gung-ho effort to rebrand the venue (first as a western house, then showing first-run art films), the theater folded again a year later. By 1956, it had been purchased by Ben Feinberg and converted (by leveling the floor) to a data processing center for IBM. (The Binghamton Theater — now the Forum — narrowly escaped the same fate at around this time) In 1961, the theater building was mooted for a new Social Security office (appropriate, observers noted, because FDR had in fact once personally campaigned from the Symphony stage). The government moved in on a five-year lease in June. The April 24, 1961 issue of the Press has a good picture of the theatre building as a stood then — a sadly nondescript three story building that bore little evidence of its earlier use. The Social Security office remained in the building until at least 1969. It has since been demolished.

Correction! This theater building has NOT been demolished. It is still standing. The website for the venerable Binghamton restaurant, Little Venice, indicates that they moved into the theater building in 1969, and they are still there today. It is indeed the same building pictured in the 4-24-61 issue of the Press. Current address is 111 Chenango. Should be changed to “retail” and my apologies for indicating the building had been torn down. It’s still there.

It looks like the auditorium part of the building has been demolished from the current Google Street View. Only the front (lobby portion) is still standing, housing the restaurant.

The original decor is all gone, but the new decor is very nice.