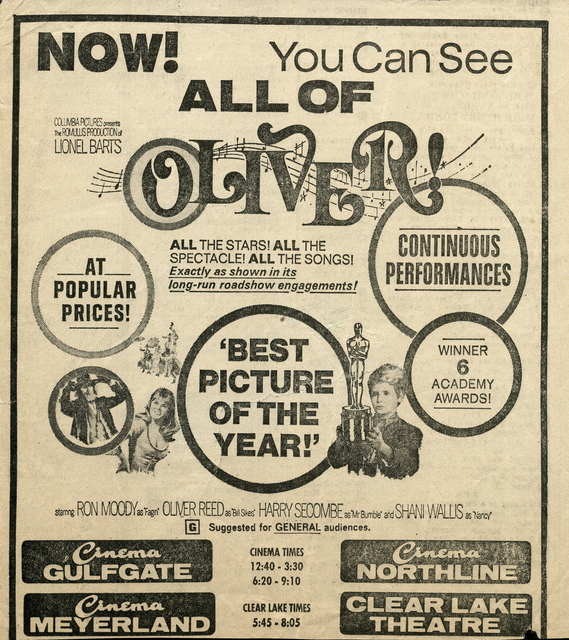 The Gulfgate, Meyerland, and Northline Cinema’s were each cast from the same mold: two auditoriums, one seating around 900 the other with a capacity of approximately 500, joined together with a shared lobby in the centre. This design was one of General Cinemas best in that it afforded great sightlines with an excellent sound system. Unfortunately, all save the Meyerland, were sliced up during the late-1970’s and converted into quads. The Gulfgate was demolished a few years ago and the Meyerland is slated to be razed. The Northline Cinema was opened on April 14, 1965 and closed toward the end of 1996. It was demolished in 2001.

When I was a kid in the 1960s and 70s my family drove down from NYC to spend summers with my dad’s parents in Houston. I remember it was always fun to go the the Northline Mall, and it was a short drive from my grandparent’s house on Catamore Street. We only attended a couple of movies at this theater and I don’t recall what they were, but I remember many times looking across the parking lot at the building. In the picture the vertical gray stripes on the exterior look much lighter than I remember them. In fact I remember them as nearly black. Sorry to learn it was demolished. Looks like many places from my childhood are disappearing, Astro World is gone and so is my grandfather’s old church on Little York Road. :(

just returned from a Houston visit.
as of winter 2008, this theater is gone.
completely razed to the ground…like it never was there.

The Meyerland Plaza 8 lists William Riseman and William Riseman Associates as the respective architect and firm for that theater. Was that also true of the Northline? Can anyone confirm?

Riseman designed all the General Cinema operations from about the early to mid-1950s through the late-1970s, when he either retired or passed. In the early days Smith Management/General Drive-In/General Cinema operated bowling alleys, Amy Joy Donut Shops, Peter Pan Snack Shop, Richard’s Drive-In restaurants as well as the drive-in and indoor theatres, everything built by the company, or remodeled after acquisition from others was the work of the Riseman firm, located in Boston. Riseman also did a lot of theatre work for Sumner Redstone/National Amusements, also headquartered in Boston.

I used to deliver films in cans there when we were done with them at North Oaks 6 or Kingwood 2. Northline was in the next market pocket down the line. I am really impressed, dave-bronx, to see you posting on this one, ha ha.

Saw the Blues Brothers here back in 1980. My memory of the place has faded over the years, too bad there aren’t any pics of this theater.

Greg i bet someone has one or two somewhere…..