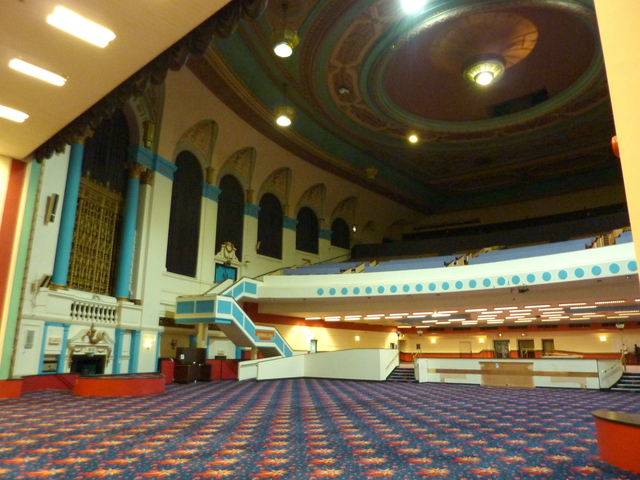 Initially a project of the Hyam’s brothers, the Gaumont State Theatre was opened by Gaumont Super Cinemas on 20th December 1937 with an ‘All Star Variety Show’ on stage, with stars appearing including Gracie Fields, Larry Adler, George Formby and Henry Hall & his Band and the opening was broadcast live on the BBC radio. The variety show had a five days run, then the Gaumont State Theatre showed its first film programme; Shirley Temple in “Wee Willie Winkie” and Jed Prouty in “Big Business” plus a stage show from 27th December 1937.

The Gaumont State Theatre was the largest movie palace ever built in England and the third largest in the United Kingdom. The theatre’s 4,004 seating capacity was split between a massive 1,356 seat balcony and an orchestra level which seated 2,648. Although it was large, beautiful, and meticulously designed, internally it was considered ‘old fashioned’, as earlier Gaumont Palace theatres were more directly influenced by the popularity of an Art Deco style.

According to Allen Eyles book ‘Gaumont British Cinemas’, the ‘State’ name and 120-foot skyscraper tower that adorns the façade were in tribute to the Empire State Building, New York which had opened just a few years earlier. The tower contained a fully equipped radio studio. The Gaumont State’s American Deco style-inspired exterior is a sharp contrast to its green Italian Renaissance style interior. The theatre’s interior still works well, especially in its massive and gilded foyer lobby. Its enormous chandelier is modelled after one in the Banqueting Hall at Buckingham Palace and still illuminates the building to this day (see photo). The auditorium has a massive circular dome in the ceiling. The fully equipped stage was one of the largest in the country, being 100 feet wide and 50 feet deep. There were 20 dressing rooms and a scenery workshop. The orchestra pit was on a lift which could be raised to stage level, and the 4Manual Wurlitzer organ console was located on the right-hand side of the proscenium and was on a revolving lift. The organ has 16Ranks and had a grand piano attached and was opened by Sydney Torch. The Gaumont State Theatre had a 400-seat restaurant which had its own separate entrance on Willesden Lane around the corner from the main theatre entrance, and the restaurant could also be accessed from the main theatre foyer.

In October 1940, the Gaumont State Theatre was closed, due to war-time conditions and it re-opened in November 1940, initially operating at weekends only. The huge stage was always well used over the years and hosted pantomimes, circus, ballet (Alicia Markova & Anton Dolin appeared in November 1949), and concerts (Frank Sinatra appeared in July 1953). The late Queen Mary (King George VI’s mother, and grandmother of the current Queen Elizabeth II, paid regular visits to the Gaumont State Theatre on matinee performances, saying she preferred to attend there rather than the West End cinemas.

In March 1957 a former waiting space beneath the restaurant was converted into a Victor Sylvester Dance Studio. Gaumont British Theatres became part of Circuits Management Association in the 1950’s, which by 1960 became the Rank Organisation. The Gaumont State Theatre was closed on 16th January 1960 for conversion of the rear stalls seating area under the balcony into a ballroom. A drop wall was constructed across the underside of the balcony. Cinema use continued in the front stalls (when required) and in balcony seating areas. Later the ballroom became a Top Rank Bingo Club. A second screen, seating 202, was opened on 23rd November 1975 by converting the former restaurant to cinema use.

The main auditorium cinema closed on 18th September 1980 and the second screen closed on 10th October 1981. Bingo continued in the former sectioned off, rear stalls seating section. Soon afterwards, the main floor was levelled off and Top Rank Bingo became the attraction in the entire auditorium when the drop wall was taken down.

The second screen located in the former restaurant re-opened in December 1985 as the Odeon Kilburn and this was closed on 14th June 1990, remaining shuttered ever since. The Top Rank Bingo Club later became Mecca Bingo Club and operated until 19th August 2007.

The Gaumont State Theatre is still Kilburn’s most identifiable landmark and a treasured part of its past. Those who remember its days as a super cinema or would like to catch a glimpse of its past could still occasionally visit the State when the local chapter of the American Theater Organ Society put on a show.

Donald MacKenzie, the house organist for the Odeon Leicester Square and many other organists have given regular recitals on the theatre’s original Wurlitzer theatre organ.

In January 2008, the building was purchased by a church, but remained shuttered, awaiting planning permission for a change of use. It was re-opened as the Ruach Ministries Church on 10th July 2010. The Wurlitzer organ has not been played publicly for several years, but it is maintained.

During WWII the chandelier was dismantled for safe keeping. After the war my dad helped to reassemble it. They put it together but it did not pass health and safety due to rusted parts so it had to be taken down, parts replaced and reassembled again. SO pleased that it is still in situ.

The drop wall dividing the rear stalls was brought forward to make a bigger bingo section. This still left a total of around 1,800 seats with the circle and remaining front stalls seating and live shows continued until the end, although some acts objected to playing to “the wall”. Rank’s Training Centre was located here and I was on an Assistant Manager’s course in the spring of 1979. Course manager was Keith Cheney, but Bill Weir took some sessions. WW, as he was referred to, moved on to the Dominion, Tottenham Court Road and then the Odeon Leicester Square. The projection box was located at the back of the dome and I remember being impressed at what looked like a near 45 degree projection rake!

Why no mention of the Grange Cinema that used to be on the other side of Kilburn High Road between Messina Avenue and Grangeway? At one time, Kilburn had 4 cinemas…now none.

the Grange has its own page http://cinematreasures.org/theaters/21111

Interesting to see mentioned above how the Gaumont State did duty as a company training centre making use of the dressing room space back stage which had been converted into meeting rooms. I was seconded to the Dept in 1970 having previously managed South Norwood Odeon, the company Training Dept HQ was at Croydon Top Rank Suite, heavily committed to staff training at the time across the group other base’s tended to be at hotels. The State had a magnificent stage which would be the envy of any west end producer. On a number of occasions when using the State I had the opportunity to go in the auditorium when the organ was being used in full throttle. I remember Bill Weir as Theatre Manager well his ambition was always to get in to the company West End Group, he was a bit annoyed when I left the Training Dept to rejoin building operation in 71, at Victoria’s New Victoria (now Apollo Victoria) and Metropole which were run as one operation sharing staff across the 2 sites. Both had great stage facilities (the New Vic of course now being a full time theatre) the Metropole however had a 70mm screen and 5 channel stereo sound installed which prevented occasional stage use. The Metropole was sold to Virgin Group in the late 70’s becoming The Venue, a music venue when the stage capability was in use again. Sadly the Metropole subsequently closed and before listing protection was knocked down.

Some internal photos taken on a CTA visit in August 2022:-

I would like to correct a comment about the Wurlitzer in the Gaumont State, Kilburn. The comment saying the organ hasn’t been played for years is completely incorrect. I maintain the Wurlitzer on a regular basis and the organ is totally playable, it is played every time maintenance is carried out. The current owners of the building Ruach City Church have always paid to have the organ maintained properly, so please disregard the comment suggesting it hasn’t been used for years. We don’t have concerts any more but the church will always maintain the organ.

Thanks David. That is good news and I have corrected the overview text. Also, It was good seeing you at the CTA visit last Monday. Keep up the good work!

Thanks Ken, it was good to see some old friends on Monday, some I haven’t seen for years, let’s hope it’s not too long before the CTA have another visit, maybe a longer one next time and I’ll make sure you hear the organ next time. ,