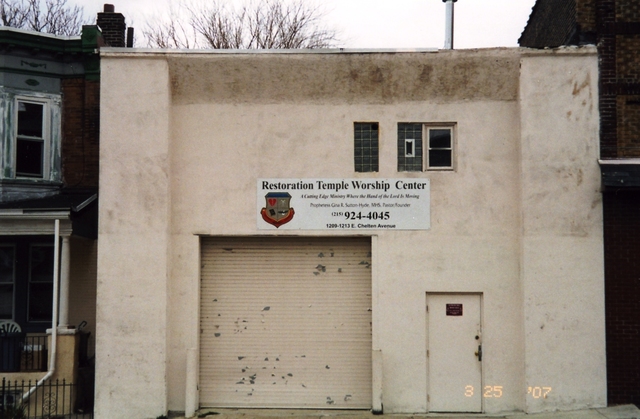 The Allan Theatre opened in 1920 seating 400. The theatre was located on E. Chelten Avenue. The architect listed for the theatre was Harvey C. Hodgens of Hodgens & Hill. It was given a redo in 1924 and was renamed Allen Theatre. The Allen Theatre closed on March 11, 1944 with Humphrey Bogart in “Crime School” & David Bruce in “She’s for Me”. It later became an appliance store.

According to the Philadelphia tax records today the building is used as a warehouse and is owned by the Chestnut Hill church.

I was born and raised in Germantown. This theatre closed before my time. Curious about it though. Anybody remember what it looked like inside? Email me at or post what you remember here. Thanks.

This theatre opened as the Chelten Auditorium in 1920. It was re-named the Allen Theatre when it was renovated in 1924. A small triangular marquee was added at that time. Even though the tax records say it closed in 1964, it actually closed much earlier, probably in the very early 1950s. I’ve come across very few who even remember this theatre. The only thing I was able to uncover is that, when the nearby St. Benedict’s parish was founded in 1922, they used this theatre as their worship site until their church building was completed in 1924. From the front today, there is no clue whatsoever that the bulding was once a theatre. I took a stroll to the rear recently and, from the rear, it does resemble a theatre.

There seems to be some confusion between the Allen Theatre and the Chelten Auditorium. Although they were only several yards apart, they were two different theaters.

The Allen Theatre seated 400 and opened in 1924 at 1209 E. Chelten Avenue NEAR Anderson Street. It closed in 1964 and today is storage for an adjacent “Restoration Temple Worship Center.” Now nondescript, the building gives no clue that it had ever been a movie house.

The Chelten Auditorium seated 800 and opened in 1935 at 1159 E. Chelten Avenue AT Anderson Street. It closed in 1953 but reopened as a Christian Cinema showing religious films until 1973 when the theater became the “Chestnut Hill Church.” The church continues today. Except for the absence of the marquee, the building has changed very little.