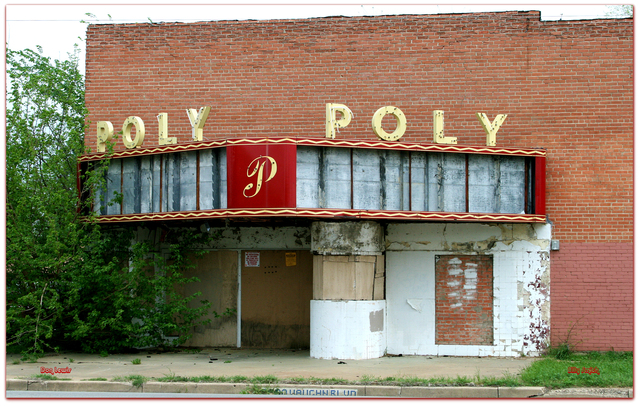 Found the sad and lonely Poly Theatre in a very old section of Fort Worth that had at one time been the town of Polytechnic. The Poly Theatre was opened on May 24, 1951 with Marjorie Main & Percy Kilbride in “Ma and Pa Kettle on the Farm” . It was closed on April 26, 1981 with Jennifer O'Neil in “A Force of One” & Chuck Norris in “The Octagon”.

Amazing how so many of these old theatres refuse to go away, (unless they burn or are demolished), as if they are all waiting on something of someone.

A 2006 photo of the Poly Theater located on the east side of Fort Worth.

My dad dropped my sister and I off at the Poly theatre every Saturday.The family who owned it in the 50s,ran the theatre like the theatre nazis.They sure kept us all in line and under control.We loved it…good times

Judging by Don’s Feb 23, 2008 posting, the Poly was used as a church before being abandoned.

I grew up 3blks. from this theater. went there every wknd. in the 70’s. It had an upstairs balcony that you could smoke in and make out with your girl/guy. It was run by an old lady named “Imogene” she had a little white poodle that she carried everywhere with her. Mean old lady! Lots of memories.

“The Poly was built around 1950 by Boyd and Imogene Millican, who also built the 7th Street Theater. They leased the 7th Street to Interstate Theaters, a first-run syndicate. (It could be that they owned and operated a number of other neighborhood theaters in town, since they used a discount card for ages 12-17 honored by the other places.) They personally operated the Poly, open 7 days a week, as a second-run venue. It, along with the Varsity, were located in Southeast Fort Worth, a working-class neighborhood. The Poly’s signature colors were red and green. (The discount card was printed red on green.) The box office was a five-window bay with green venetian blinds with red tapes; the marquee sign’s letters were red and green neon lights. The Millicans appeared to not like children…or anyone else, for that matter…which was an odd circumstance for a family that operated two movie theaters. In retrospect, I suppose they had to be stern since in the 1950s and 1960s families felt comfortable dropping off their kids relatively unsupervised for 3 hours and 45 minutes of two features, coming attractions, and a cartoon. For some reason, I wanted to be there when they opened on Saturday at noon…the box office girl raising the blinds seemed somehow magical. The automatic ticket machine and the teller’s change machine were exotic technology. The concession stand was where I could buy a bag of pop corn for 10 cents and a small coke for 5 cents…admission under 12 was 25 cents, leaving me with 10 cents to call home when I was ready…50 cents was my Saturday "movie money,” left on the dining room table every week. Monday-Friday, the Poly opened at 5:30 p.m. and Sunday at 1:30 p.m. Obviously, I spent far too much time there! The Millicans died in the early 2000s, and the 7th Street was razed by distant relatives in order to sell the premier location. The Poly building was sold to a neighborhood church which has since disappeared, and the county tax office has no record as to the owner of the property may now be. I suspect the building will ultimately be condemned and torn down too."

The May 3, 1946, issue of The Film Daily said that R. F. Smith was the architect for the New Poly Theatre being built by Tri-States Theaters at Forth Worth.

Newspaper listings for this cinema stopped in 1980.

The Poly was given its name for the neighborhood where Texas Wesleyan University was founded as Polytechnic College in 1890 and opening in 1891. The pre-Civil War neighborhood in Southeast Fort Worth became known as Polytechnic Heights and nicknamed by locals as “The Poly.” In the post-War theatre-building boom spurred by the Paramount decree separating Hollywood studios from exhibition and population moves away from downtown areas, D.O. “Boyd” and Imogene Milligan built The Poly. It opened on May 24, 1951 with “Ma and Pa Kettle on the Farm” supported by a a cartoon and newsreel on a thirty-year lease.

Milligan had worked at the Majestic Theatre in downtown Fort Worth from 1926 to 1930 before establishing the Pix Theatre during the World War II on a subleasing agreement with a church who was using the venue. After the War, the Milligans designed and were building the 7th Street Theatre in Fort Worth. But Interstate Theaters took that one over in the development stages so the couple moved on to creating The Poly. It was an independent neighborhood operation and positioned as a sub-run discount double-feature house.

The Milligans successfully ran the Poly switching it to widescreen presentations with good acoustics. And the theatre went out of business the way a Texas movie theater should be required by state law to go out of business – proudly showing a double-feature of Chuck Norris fims. The theatre ceased operations on April 26, 1981 with “A Force of One” and “The Octagon.” Boyd Milligan – now at age 77 – would then reclaim the 7th Street Theatre in 1992 operating it until 1999. He retired from the movie exhibition business at Age 94. As for the Poly, it would become a home of the New Unity Missionary Baptist Church before it found new quarters. The building then went into a prolonged period of vacancy.