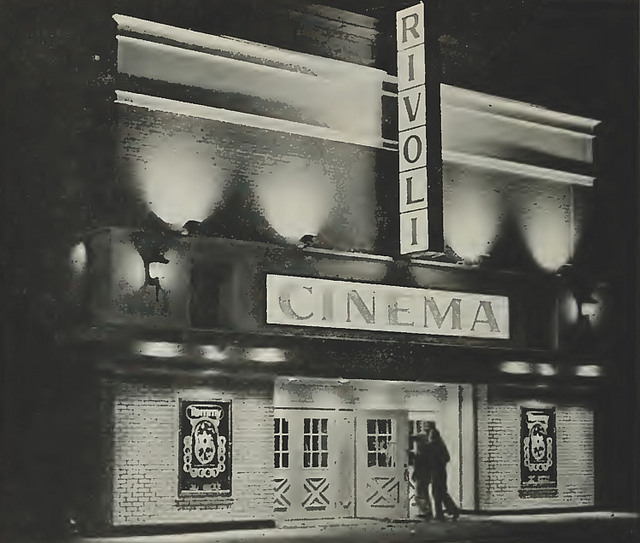 In a brick building originally the Cedarburg General Store, built in the late 1880s by area businessman Friedrich Boerner, the Rivoli Theatre opened in 1936 with a plain but attractive white/black Art Deco Vitrolite facade and angular marquee. At some point in the 1970’s the facade was altered to the then-trendy “mansard look”.

In late-2005, a preservation group from the Cedarburg community became active in raising funds to restore a 1930’s appearance to the building, and in December of 2005 they announced that approximately $800,000 had been raised to that point and secured the services of a noted Wisconsin architectural firm for design proposals.

At some point in its history, Marcus Theatres acquired the Rivoli and operated it until 2007, then sold the building to the Cedarburg Historical Society.

Full restoration of the facade came in Summer 2008 and the Rivoli Theatre is now a stunning highlight to behold on Washington Avenue.

Opening day: January 11, 1936.
The premiere program: “A Tale of Two Cities”, with Ronald Colman in a dual role.
The Rivoli will reopen about January 1, 2007 under volunteer ownership and operation. Admission will be $3.00; $2.00 on Tuesdays.

The web site for the organization now operating the Rivoli in Cedarburg is: http://www.revivetherivoli.org

Here is another photo of the Rivoli:
http://tinyurl.com/257geq

Visiting my parents this weekend, I drove by and the 1930s facade has been returned to this theatre. Did not have my camera to take a photo

Yes, what a difference. Mr. Dunn’s work with Vitrolite is truly amazing! If anyone knows of available Vitrolite, please contact him at this website. www.vitrolitespecialist.com

In 1889, Boerner’s dry goods store was built in the heart of downtown Cedarburg. When business waned, a Milwaukee movie mogul assigned the storefront a new identity and opened the building as a cinema in January 1936. The Rivoli, located at W62 N567 Washington Avenue in Cedarburg has been a movie venue ever since.

Although the Rivoli had been operated by Marcus Theatres for many years, Marcus decided not to renew its lease in 2006, an action which would force the 250-seat single screen theatre to close. Many residents felt the charm of their quaint town would suffer without the cinema. Public opinion prevailed, and the Cedarburg Landmarks Preservation Society (CLPS), a small Cedarburg non-profit group, committed to restore the building to its former glory.

Approximately $1,000,000 was spent to purchase and restore the building. Many professionals and craftsmen donated services and materials, while individuals, foundations and community organizations donated nearly $600,000. As the restoration continues, people continue to donate, showing overwhelming support for the project.

Opening in January 2007, ticket prices were reduced to $3, and tickets are only $2 on Tuesdays. In addition, concession prices were cut in half. The new business model included a commitment to family entertainment, meaning that R-rated films are not shown. Typical Rivoli fare includes animated cartoons, romantic comedies, and classics, among other films that are appropriate for all ages.

Over 900 people from Cedarburg and the surrounding area form the volunteer work force. Although a professional projectionist is paid each day to operate the theatre, four to six volunteers per show manage all ticket sales and concessions. Seven p.m. showings are offered daily and matinees are offered on Saturday and Sunday. Sell-outs are common Saturday and Tuesday nights.

The retro Rivoli has beaten the odds. Established in a renovated storefront, abandoned by its parent company, and then lovingly restored by local residents – this local treasure will continue to draw young and old alike for many years to come.

The 15-day 2019 Milwaukee Film Festival Oct. 17-31 drew a record 87,618, up 12% over 2018. This year, the festival also expanded to the Rivoli Theatre and the Broadway Theatre Center in Milwaukee … eight screens across six venues, the largest footprint in its history. The Oriental Theatre remains the anchor venue. Audiences voted at each screening to determine the three awards. “Toni Morrison: The Pieces I Am” received the Allan H. (Bud) and Suzanne L. Selig Audience Award for Best Feature; “Raise Hell: The Life and Times of Molly Ivins” won honors and a $2,500 prize for the Women in Film Audience Award; and “Tree #3” received the Selig Audience Award for Best Short.