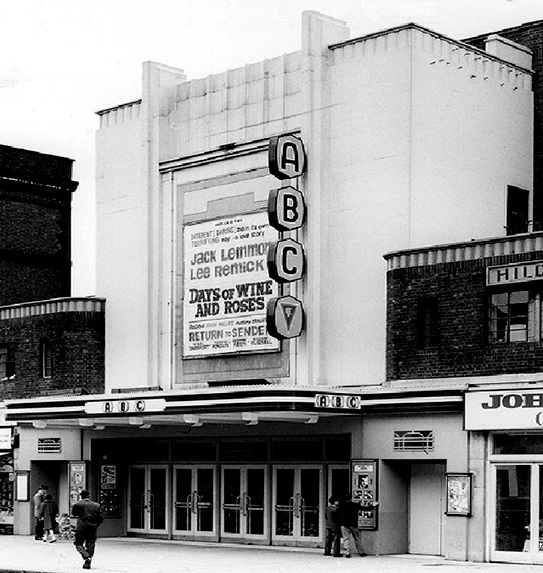 Located in the north London inner city district of Stoke Newington. Built for and operated by Associated British Cinemas(ABC), the Savoy Cinema was designed by their in-house architect William R. Glen in a splendid Art Deco style. Seating was provided for 1,890 in stalls and balcony levels and it was equipped with a Compton 3Manual/5Ranks theatre organ which had been transferred from the Astoria Cinema, Cliftonville in Kent.

The Savoy Cinema opened on 26th October 1936 with Gary Cooper in “Mr. Deeds Goes to Town” and Madeleine Carroll in “The Case Against Mrs. Ames”.

It became the ABC from 1961 was closed on 12th March 1977 with James Coburn in “Cross of Iron”. The following day it re-opened as the Konak Cinema, taken over by Asians who screened Bollywood movies.

It was taken over by an Independent exhibitor from March 1982 and re-named Ace Cinema screening regular release films again. This did not last last long as the Ace Cinema finally closed on 16th February 1984 with Al Pacino in “Scarface”.

The stalls area was converted into a snooker hall with a false ceiling extended from the front of the balcony towards the proscenium. The balcony remained empty and unused. A fire was started by vandals in the balcony area which did damage to the auditorium. By the summer of 1995, the foyer had been converted into two shop units with the removal of the twin staircase which led to the balcony. A Turkish community centre operated in the former balcony foyer using a former emergency exit stairwell to gain access and the stage was converted into a restaurant, but this has closed. The snooker hall operated out of the rear stalls area until around 2014 when this space was converted into a function room named Epic and the snooker operation moved into the former balcony foyer which had been vacated by the Turkish community centre.

A sad end to what had once been a fine building.

In April 2017 it was announced that plans were in motion to convert the building into an Arts Centre presenting comedy, theatre and music. Costing was estimated to be £3million. Planning permission was approved by Hackney Council on 20th July 2017 with a proposed name of Hackney Arts Centre. In February 2018 £1.9million funding was obtained and the former circle seating area had been cleared of accumulated rubbish and 1,000’s of pigeons had been vacated from the building.

It re-opened as EartH (Evolutionary Arts Hackney) in September 2018 with a jazz performance by Mulatu Astatke and singer Fatoumata Diawara in the former circle which now has seating for 680. The former stalls seating area is used as a performing space with a 1,200-capacity (no seating). There is also a 250-capacity care/restaurant located in the former circle foyer. On 17th December 2018 films returned to the building with a six days season of classic movies for Christmas.

This is a view of the building at the current address:
http://tinyurl.com/dejobl

The stalls area now operates as a function space called epic, no decoration remains in view but you can see the line of the front of the balcony in the new ceiling

When the Ace closed, its cinema cat “Queenie” moved a few doors down the road and was adopted by the Rio Cinema

Some photos from March 2019 following the re-opening:–