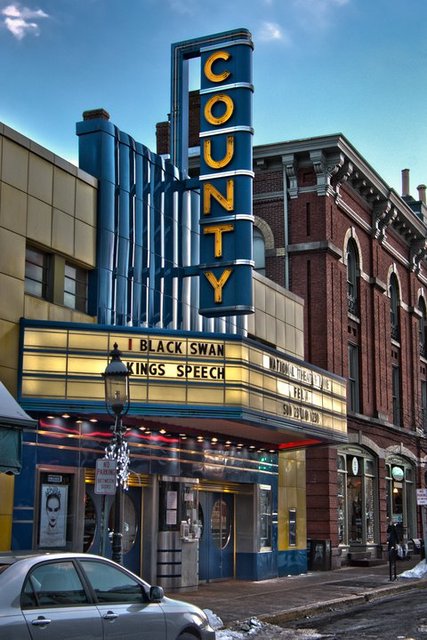 Doylestown is 40 miles north of Philadelphia’s City Hall and is the county seat of Bucks County. The County Theatre opened September 3, 1938 with the movie “Little Miss Broadway” starring Shirley Temple. The original seating capacity was for 700 and the theatre was equipped with air conditioning. Architects Edward Silverman and Abraham Levy designed the theatre. The County Theater replaced a prior theatre, the Strand Theater, which was built in 1925, but suffered a fire. Sunday movies began on November 17, 1940, ending a ban on Sunday movies in Doylestown.

In the mid-1950’s, yellow ceramic tiles and upper blue tiles were added to the façade, which with the original lower blue tiles, gave it the distinctive look. Eventually, the theatre fell on hard times. In the early-1980’s the auditorium was divided into two auditoriums and those auditoriums were shortened, so apartments could be built in the part of the original auditorium that included the stage. In the 1980’s, the neon letters on the vertical tower went dim. In the early-1990’s, different theatre operators tried, but the theatre was closed for months at a time. Because of TV & multiplexes, the County Theatre was no longer viable for daily mainstream blockbuster movies.

The County Theater was reopened for arthouse films on February 5, 1993, by a non-profit organization, Closely Watched Films Inc., a local film society that had been showing art films in Doylestown since 1982. “Enchanted April” was the film which reopened the theatre that day, and ever since, the County Theater has enchanted film fans with arthouse films, classics, and special presentations. The non-profit organization became the owner of the theatre on April 1, 1997.

The exterior of the County Theater is depicted in the book “Popcorn Palaces: The Art Deco Movie Theatre Paintings of Davis Cone” (2001) which describes the County’s exterior ‘an outstanding Art Moderne design’ The Art Moderne exterior has been restored. In May 1998, the towering 18 foot neon vertical was removed, and restored, reinstalled in September 1998. The marquee was removed October, 1999, and restored, reinstalled May 2000.

In January 2016, the County Theater purchased the adjacent Poor Richards building. In January 2020, the Poor Richards Building was demolished, and work by Voith & Mactavish architect John Cluver who designed the Bryn Mawr Film Institute expansion, began in order to add to the County Theater. The lobby was expanded, and a new stadium seated Theatre #1 was built with 179 fixed seats + 5ADA and a 16.9 flat screen of 32ft x 18ft. 23 years old seats in the historic County Theatre were replaced with larger seats, with 98 +4ADA for Theatre #2 and Theatre #3 having 89 seats +4DA.

Pennsylvania theatres were closed in March 2020 due to the Covid-19 pandemic. The vertical neon sign was removed in December 2020 for repainting, and reinstalled in March 2021. The marquee was to be repainted in place and the closure of the theatre meant work could proceed faster without audiences.

Contributed by Marc A. Wessels, Howard B. Haas
Get Movie Tickets & Showtimes

http://issuu.com/bucksliving/docs/bucks_sept
Go to page 39 for article and photos of the County Theatre in Dolyestown, PA

Here is a current video tour of the County theater from their blog. http://www.renewtheaters.org/blog/2011/video-tour-of-the-county-theater/

Thanks, The County Theater, which shows first-run, art, independent, and foreign films, is “ahead of the curve” for small theaters, Toner said. Its 4,100 members and other supporters responded to a Digital Cinema Challenge by surpassing the $200,000 goal for a minimal conversion.

The additional $110,000 paid for a full conversion, including 3D in one auditorium, projectors with capacity for 4,000 lines of resolution (2,000 lines is the current standard), new screens, and other equipment. Rick. From that article, here are the details: