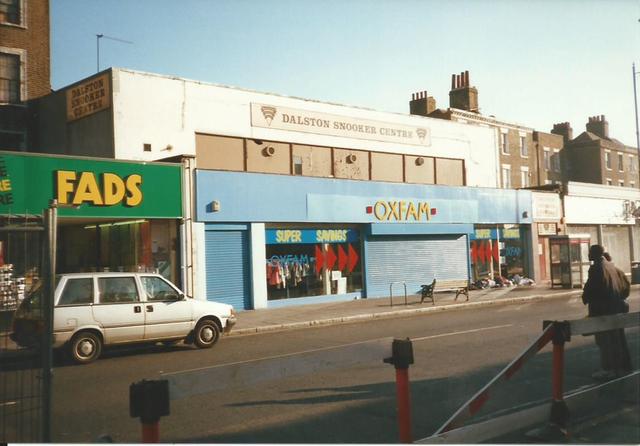 Opened as the Kingsland Imperial Picture Theatre in 1912, it had seating for 500.

In early 1933, it was closed, and re-opened on 7th August 1933 after enlargement and re-furbishment as the Plaza Cinema. It was operated by Kingsland Pictures Ltd. who also operated the Coliseum Cinema, Stoke Newington.

They closed the Plaza Cinema on 19th December 1959 with Eric Fleming in “Curse of the Undead” and Barbara Wilson in “Terror in the Midnight Sun” (Rymdinvasion i Lappland).

The building was converted into a shop (last an Oxfam shop) and for many years the upper parts were in use as a Snooker Hall. The facade had been partially removed, giving no sign of this being a former cinema building. It was demolished in Spring 2009, as part of the Dalston Junction redevelopment (which also destroyed the former Gaumont).

recently demolished for the huge redevelopment of the Dalston area, this photo of the site also shows part of the office/apartment complex being built behind the site where the Dalston Gaumont stood
View link

This was another cinema that I often passed as a child, though I don’t think ever visited it. After it’s closure as a cinema, it became a branch of Smart Weston, which is also now defunct. Smart Weston can best be described as “Burton’s for the younger man”.

The Snooker hall above was previously a disco, “The Chez Don”