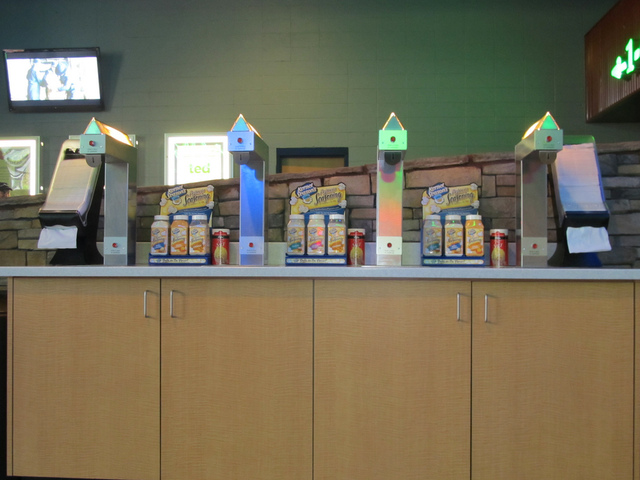 Opened as the Litchfield Cinema on February 23, 1990. The Powder Springs was among the last of the pre-stadium seating Regal Cinemas in the metropolitan Atlanta area when they took over in 1991. This multiplex wasn’t too bad but lacked anything distinctive. It was closed in 2000.

I think this may have been built by Litchfield Theaters prior to Regal(pre-bankrupcy) buying them out. A number of the surround sound speakers were stolen during construction and could be found from time to time in various pawn shops in the area. There was another of these off Austell Road, not far from the lost Marboro Drive-In, as best I can recall it was called the Austell 10 and closed when Regal built the big 22 screen down the road. Like Jack said, it was an OK place to see a film but nothing special.

It was definately a Litchfield theatre before Regal bought it, and it was almost identical to the Litchfield Austell Road Cinema. Like Austell, it shared a truly weird box office set up. The concession stand was a floating square, and one side was the box office. You would enter the lobby and turn right to buy tickets. It was a mess when a popular movie opened, with people everywhere, including going out the door. However, the lobby was bigger than Austell’s and Jack Coursey’s picture shows that it had a covered area outside for the line to form.

Directly across from the entrance doors was the entrance to the hallway where all the auditoriums were located. So you would come in, buy your ticket, get your popcorn, and then get in line to have your ticket ripped. This was highly annoying if you needed to go back out for the restrooms, because you had to show your ticket stub. This was done so that middle school kids would come in and play the video games in the lobby. The larger lobby at Powder Springs made this bearable, but a Friday night at Austell Road was often a nightmare of lines everywhere, and kids running around the video machines.

Does anyone know if this theater is available for sale or rent? If you do know, could you contact me and let me know who I need to get in touch with about it. Thanks! rionrustle @ yahoo . com

This theater has been acquired by the Michigan-based Neighborhood Cinema Group (NCG) and will reopen on June 22, 2012. View article

Status should be changed to Open. Now operating as NCG Marietta Cinemas. Here’s the website: http://www.ncgmovies.com/marietta/

City leaders and representatives from the Neighborhood Cinema Group celebrated June 21 the opening of a multi-million dollar, 10-screen theater at 1050 Powder Springs St. The theatre, which includes stadium seating, 3-D and surround-sound technology, is the only cinema in the city. It is expected to create 40 to 50 regular part-time jobs and several full-time management positions

NCG Cinemas is opening a 10-screen, movie theater with stadium seating, 3D and surround sound in the former Regal Cinemas building at 1050 Powder Springs St., near Bellemeade Drive in Marietta.

The city made the announcement late Thursday, after the cinema chain deal was finalized earlier this week. Construction on the multi-million dollar facility is tentatively scheduled in January, with a grand opening planned for early summer.

NCG Cinemas currently operates a cinema in Acworth. The planned cinema in Marietta will be the only one within Marietta’s city limits, said Beth Sessoms, the city’s economic development manager. She said she anticipates it will draw many west Cobb residents to Marietta.

“Right now, they have to go to Town Center to go to a movie, and it will be nice to have one closer, not only for people who live here but visitors who come to the Square that might want to go to the movies,” said Sessoms.

Sessoms said there were no incentives or tax breaks offered to NCG to open in the Powder Springs Street location.

During the renovation of the old Regal Cinemas facility, 50 contractors will be employed, and NCG expects to create 40 to 50 regular, part-time jobs as well as several full-time management positions, according to the city.

NCG Cinemas spokesman Pat O’Boyle said its Marietta cinema will be slightly smaller than the one in Acworth, which has 12 screens and was a newly constructed building, completed in December 2008.

O’Boyle said the ticket prices at the Marietta cinema will be similar to Acworth’s cinema pricing. NCG Acworth Cinemas offers $6 matinees Monday through Thursday until 6 p.m. and Friday through Sunday before noon. Regular admission is $9 adults, $8 students and military, and $7 for children and seniors. NCG always offers free refills on all sizes of soft drinks and popcorn, O’Boyle said.

“NCG is excited to come to the Marietta community and to be an active participant in the revitalization of the Powder Springs corridor,” NCG President Jeff Geiger said in a statement.

“We are encouraged by the fabulous demographics and the improvements already made in the area. Our new cinema will be a draw for the entire area and offer the nicest movie experience you will find anywhere in the nation.”

The new cinema is among several developments being planned in the Powder Springs Street redevelopment. Wal-Mart is seeking a permit for a 41,000-square-foot Neighborhood Market, which will be located across from the cinema. A 42,000-square-foot senior center is being constructed near the cinema site. A multi-use trail under construction is expected to connect the area to nearby neighborhoods as well as Marietta Square, and streetscape enhancements have begun for the area.

This opened as the Litchfield Cinema on February 23rd, 1990 and renamed Regal 10 in 1991. It closed around 2003 and reopened by NCG Cinemas on June 21st, 2012 as NCG Marietta (as listed on the NCG website). Grand opening ad in the photo section.