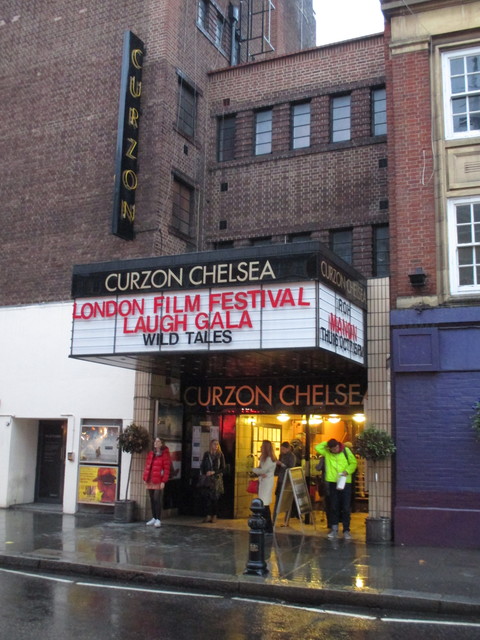 Located in the southwest London inner city district of Chelsea. This huge cinema building first opened on 8th December 1934 as the Gaumont Palace with Jack Hulbert in “The Camels Are Coming” & Chester Morris in “Let’s Talk It Over”. It was built on the site of the studios and laboratory of film pioneer William Friese-Greene.

Designed by Gaumont/Provincial Cinematograph Theatres(PCT) architects William E. Trent and Ernest F. Tully it had a seating capacity of 2,502. It was equipped with a Compton 3Manual/13Rank theatre organ that had an illuminated console, opened by organist Terence Casey. It had a fully equipped 30ft deep stage with fly-tower, a large scene dock, property room, rehearsal room and eight dressing rooms. There was also a 150 seat café/restaurant which has its own entrance.

Notable decorative features on the façade of the building are a sculpted bas- relief head of Friese-Greene with masks of comedy and tragedy on either side, that are positioned high up on the façade. These are the work of designer Newbury Abbot Trent who was the younger brother of the architect William E, Trent. On the lower section on each side of the entrance were two Art Deco style panels again by Newbury A. Trent which depicted “The Awakening of Science to the Force of the Elements” and “The Harvesting of the Elements in the Film” (these have either been removed or rendered over).

The cinema became the Gaumont Theatre from 1937 and was modernised in 1960. The Compton organ was removed from the building at this time and was installed in Watford Town Hall and is now installed in Watford Colosseum. The Gaumont Theatre was re-named Odeon from 7th January 1963 and closed on 11th March 1972 with Sean Connery in “Diamonds Are Forever”.

The foyer and stalls area was converted into a Habitat furnishing store while the former stage area was converted into flats and offices. A new Odeon Cinema seating 739 was created in the former balcony area, using the former café restaurant entrance as its access. It opened on 9th September 1973 with Roger Moore in “Live and Let Die”. The Odeon closed on 21st November 1981 with Tim Curry in “The Rocky Horror Picture Show” and Gene Wilder in “Young Frankenstein”.

The cinema remained closed for almost two years until the independent art house group Artificial Eye took it over and re-named it the Chelsea Cinema. It re-opened it on 15th September 1983 with Gerard Depardieu in “Danton”.

There were special screenings of David Hemmings in “Blow-Up” (1966) directed by Michelangelo Antonioni on 30th March 2018 and “Stalker” (1979) directed by Andrei Tarkovsky on the afternoon of 31st March 2018. The Curzon Cinema Chelsea closed on the evening of 31st March 2018 with the New York Met Opera performance of Mozart’s “Cosi fan tutti”. Special prices for the film performances were £5.00 and £8.00 for Pullman seats which included a beer, wine or soft drink. The regular admission prices at closing were £16.00 and £18.00 for Pullman seats. The building was demolished in March 2019, apart from the Art Deco style façade. Three new screens (one with 400-seats) will be built as part of the new apartment building on the site, and are due to open in 2022.

Not necessarily saved… Parisite Property Developers have been given permission to demolish the building and put up flats etc in its place with a proviso for anunderground cinema of sorts. Cadogan Estates successfully appealed and once again big business has been allowed to overrule what little is left of our Kings Road heritage.

this article may be the recent plans, for a triplex including a new 400 seat main auditorium- http://www.getwestlondon.co.uk/news/west-london-news/revamped-cinema-planned-kings-road-9481124

Anyone know how large the screen actually is here? I’ve only visited 2ce, both “flat” movies. There’s photos here of the screen set to flat. Maybe at a “scope” movie, someone can photo?

This cinema is closing on March 31st. It will reopen as a 3 screen cinema in 2022 with approx 600 seats across the screens. From the plans it looks like the front of the building is being saved but with all being being rebuilt. Very sad news but with a hint of optimism.

Still a difficult neighborhood in which not to have disabled access – the place needed some work! Long live!

Some photos taken on the final afternoon – Saturday 31st March 2018 – before and after the final film “Stalker” (there was a live Met Opera screening in the evening).

The main planning applications relating to the redevelopment are:

Of particular note here is the document titled “KING’S ROAD HISTORIC BUILDING REPORT JUNE 2015” in the 2015 application, which provides a (somewhat “potted”) history of the site. The original 1930s cinema plans—very beautifully drawn—are included on PDF pp28-34. Alas, the text on these is not quite resolved in this file, being throughly obliterated by aggressive JPEG compression.

Plans for the proposed cinema can be seen in the 2016 application at (basement) levels B2 (Auditoria 2 and 3 – “indicative layout” only) and B1 (Auditorium 1), the larger Auditorum 1 being situated above the two smaller auditoria, as is clearly shown in “PROPOSED SECTION AA.”

The architectural practice responsible for these plans is Paul Davis + Partners.

The proposed main auditorium is therefore quite generously proportioned, being about the same size as the “existing” auditorium, if its sidewalls were moved in to form a rectangular auditorium. (The “existing” fanned out to about 105ft. wide at the rear.)

HowardBHaas: Estimating from the demolition plans (2016 application, but they’re probably identical in the 2015 application) — the screen width was probably 40-45ft.

More pure nuggets of tedium may be extracted and summarised here if/when I review more of the planning documents!