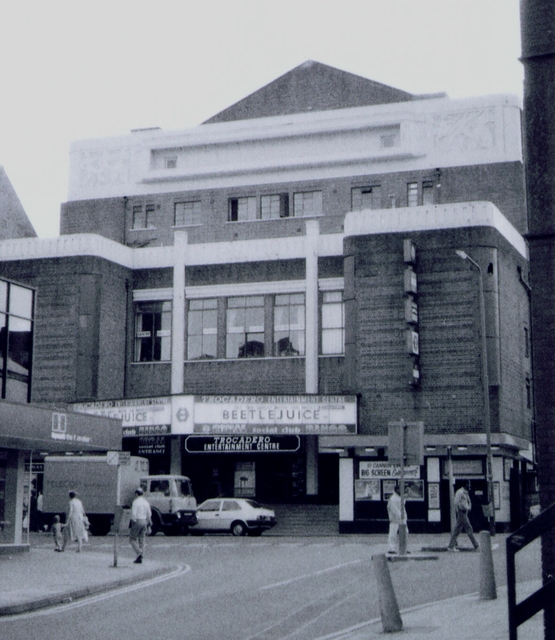 Derby’s grandest super cinema, the Gaumont Palace, opened on 17th September 1934 with Jessie Matthews in “Evergreen” & Shirley Grey in “The Crime of Helen Stanley”. It had taken a year to build using over 500 tons of steel, a million bricks and 5,000 tons of concrete according to the publicity at the time. Built on a difficult sloping site, the scale of the building for Derby was quite monumental, the impact of the building on a rather narrow London Road was reduced by a large central recess flanked by the staircase towers either side. A flight of white stone steps led up to the impressive marble floored and walnut panelled foyer.

The auditorium was dominated by the stunning Art Deco style ceiling with its long central recess filled with over 500 light bulbs, the Gaumont publicity department boasted that it was “the most beautifully lit theatre front of its size in the kingdom” and the auditorium was a ‘fairyland of light’.

The auditorium walls were decorated with fine vertical ribs and the proscenium was a stunning gold frame. Equipped with a Compton 3Manual/10Rank organ which according to the brochure was “a musical giant of a thousand voices”, it was opened by organist Con Docherty. The Gaumont Palace quickly established itself as Derby’s leading cinema. It had a large restaurant located above the foyer. In later years this became a Victor Sylvester Dance Studio.

As audiences began to dwindle, other Derby cinemas began to close but the Gaumont fought back by staging one-night concerts including Little Richard, the Everly Brothers, the Four Seasons, Billy Fury, John Leyton, Eden Kane, Marty Wilde, Mike Sarne, Cliff Richard, Gene Pitney, the Kinks, Roy Orbison, the Walker Brothers, the Rolling Stones and the Who.

When the Rank Organisation closed the nearby Odeon Cinema on St. Peter Street, the Gaumont was renamed Odeon in 1965.

The cinema was tripled in 1974 with a drop wall from the balcony front creating two mini-cinemas in the rear stalls area, each seating 138, leaving 800 seats in the balcony. The front stalls seating was retained but never used.

By the 1980’s, Derby had lost the majority of its cinemas with just the Odeon, the nearby ABC (former Regal Cinema) triple and the single screen Metro arts cinema. Then in May 1983 to public outcry, first the Odeon closed screening “Gandhi” & “Chariots of Fire” and then it was announced that the ABC was to close for an extension of the Eagle shopping centre.

ABC purchased the Odeon and in a very expensive conversion, split the building horizontally to form a single screen in the circle area seating 559 (this was an amazing auditorium with gold curtained walls and the ceiling restored, as well as huge luxury armchair seats) and the former stalls area was converted for bingo. Sadly the huge lobby was split into two separate entrances for the cinema on the right and the bingo on the left, losing the walnut panelling.

The cinema was called the ABC Trocadero Entertainment Centre opening on 24th August 1983 with Roy Schneider in “Blue Thunder”. This left the city of Derby with just one commercial cinema screen which was very frustrating as you had little film choice. The cinema changed its name one final time when it became the Cannon.

Then in 1988, Derby received not one but two ten-screen multiplex cinemas, the National Amusements Showcase and the AMC on opposite sides of the city.

The Cannon was set to struggle on, then one morning shortly before the cinema opened for the early morning kids club, part of the ornate plaster ceiling collapsed, wrecking the auditorium. The final film to play was Sean Penn in “Willow” on 17th December 1988.

The cinema never reopened and lay empty for many years, eventually the bingo moved out too, leaving only a dance school operating in the former café.

Then in around 2000 the auditorium was gutted and whole building was converted into a nightclub and banquet centre called the Zanzibar. This was closed in January 2010.

In spring of 2013, the building was converted into a pan-Asian restaurant named Cosmo.

A report in today’s local paper says that there is a plan to turn it into a restaurant. Lets hope the same fate has the Kings Heath cinema don’t happen here.!! WWW.thisisderbyshire.co.uk

A report in the Derby Telegraph shows the new restaurant that is taking over this lovely old building is nearly ready for opening.

The fibreglass bust that has sat on the front of the building for around 15 years has been sold by the owners.They have also sold the Zanzibar letters and stars from the canopy. All the money raised is going too a local charity.

I have just uploaded a new photo showing the Gaumont as her new life as a restaurant.They even refurbished the centenary of cinema plaque on the front of the building. Although I have not seen many pictures of the new insides, from the revised planning details I found on line they have only used the ground floor.

The ballroom in the former Restaurant was called the “Arnold Rudge Rendezvous for Dancing” which sounded like something invented by comedy script writers. In the 1970s it lacked much of its original grandeur. The organ had gone. The side walls looked as though much of the decorative detailing had been removed for economy or modernity. The last stage show was probably the musical, “Hello Dolly!” performed by a local amateur operatic society in 1971. The theatre had a full fly tower with the words Gaumont Place written on the back wall which survived into its Odeon days.

This evening there was a fire in the kitchen area, the building was evacuated , no one hurt and the fire extinguished very quickly. Fire brigade on scene and ventilating the building.

A planning application No 22/00482/FUL has been lodged with the city council to turn the former dressing rooms at the rear of the building on Osmaston Road into a 10 bed HMO. Currently these are rooms are used by the restaurant staff. The application states that there will be no access to the restaurant from the HMO.