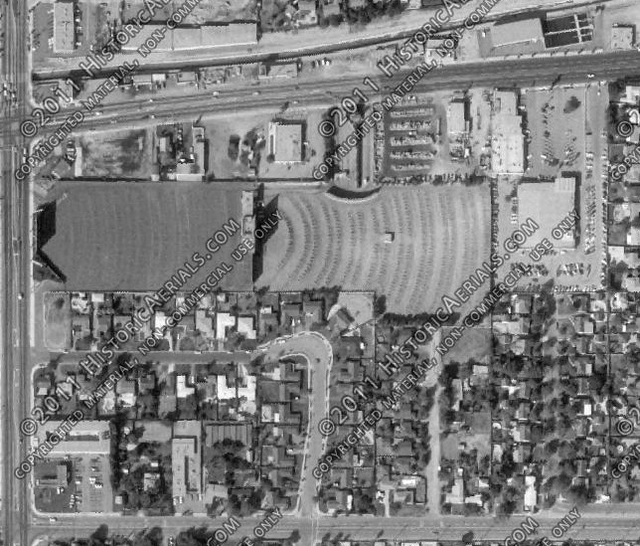 Nevermind, I found it. On the corner of E. Arrow Highway and N. Grand Ave.

Anyone know roughly when this drive-in closed down?

I worked there from 1973-1974 or so. One of my job duties included what we called being the “late man”. The late man was last to leave and was tasked with turning off the speakers as people left in order to minimize complaints from neighbors. It was amazing just how far the sound from relatively few speakers left on would carry in the wee hours toward closing.

If you’re trying to figure out the layout from the aerial picture, both screens faced east. The little shack in the east lot was the projection booth for Theatre 1. The snack bar, guard shack, restrooms and offices were in the long building between the two theatres and the projection booth for Theatre 2 was atop the snack bar. All traffic entered from Arrow Hwy. on the north side. It was owned by SRO (Sterling Recreation Organization) of Seattle as were several other theatres,race tracks and swap meets in the general area at the time.

The Vista Pointe apartment complex was later built on the site. I lived there From September 2001 to June 2003.

From BoxOffice, Jan. 4, 1960: “C. E. Langford opened the new Covina Drive-In, a 400-car situation, December 18. The drive-in is on Arrow highway and Grand avenue and has a large playground and a self-service snack bar. RCA equipment for the Covina was furnished by John C. Filbert Co. John Reynolds is manager of the new drive-in and Film Booking Service is doing the booking and buying.”

Saw a few movies there, growing up between 67 and 78. The two I remember the most were The Love Bug, with the whole family. And Butch Cassidy and the Sundance Kid, with a babysitter. I also remember being in Boy Scouts and we had our meetings at the VFW next door. My friends and I would sit on the wall over there and watch the movies without any sound!