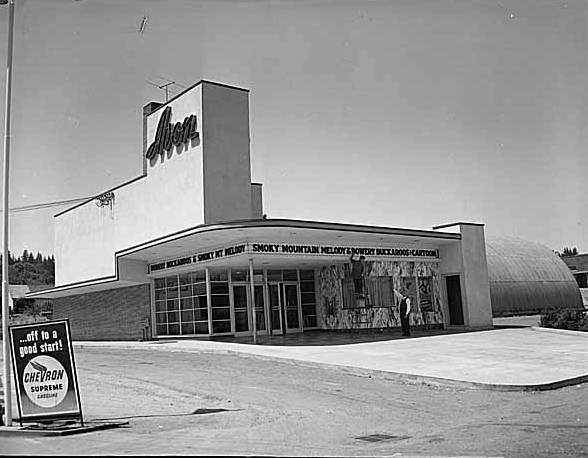 The Avon Theatre was a Quonset Hut style theatre which opened in 1949 at the corner of NE Bothell Way and Main Street. The theatre was closed in the late-1950’s and in June 1962, the building was moved across the street and became a used car dealership and auto repair garage. It was demolished in 2010. The original site of the Avon Theatre became a Safeway supermarket, which has also since been demolished.

Yep, that’s the photo. I hadn’t noticed the quonset part. Just the interesting shape of the marquee and lobby.

This theater was built in 1947 where the Safeway is and it was moved down the street (Bothell Way) in 1962. Not sure when it closed but it’s now a Used auto dealership

Sadly, The Bothell Avon Theatre has been demolished. The City chose to destroy this landmark building instead of moving it to a new location.

My family moved from Seattle to Bothell in 1958 where I started 7th grade at Anderson Junior High School that fall, and I have lived in the Bothell area ever since; except for 4 years in the Marine Corps from 1964 to 1968.

As expected the Bothell area has changed tremendously over the years. It’s fun to look back sometimes and remember how the changes came about. For some reason I remember the Avon Theater very clearly, I think because the first movie I saw there was Thunder Road with Robert Mitchum. It had plenty of action for that time period and it was just when guys my age were getting seriously interested in cars.

That Safeway store was wear I got one of my very first jobs, after having a Seattle Times paper route first. It’s too bad that the city of Bothell wasn’t interested in saving the Avon building, but I guess that’s progress.

Per Ron Green: It was completed in 1948 as a theater, then moved in 1962 to the south side of Bothell Way, just across from Brooks Biddle. The lobby part and the quonset hut were eventually both used for a used car dealer and a repair garage. Before that, there was a feed store in the new location for a while. There was also a time in the 1970s when it was a consignment shop. I’ve scanned page 115 of the 2009 book Bothell Then and Now which showed the building(s) shortly before they were torn down. The next year, 2010, was the end of it, with all the demolition that took place as Bothell Way moved half-a-block closer to the Sammamish.

Image as Bothell Auto Sales referred to above added to Photos Section.