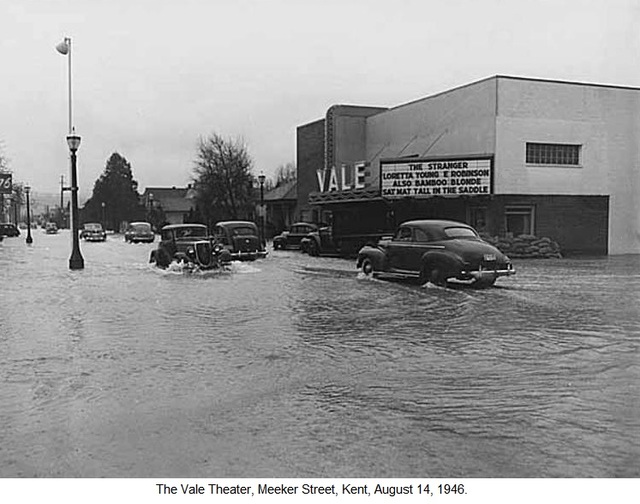 The Vale Theater was built in the mid-1940s when the other movie theater in Kent (also on Meeker Street) was razed. In the mid-1950s, with the introduction of television, the Vale also met the wrecking ball and was replaced by a bank.

The link repairman has clocked in:
http://tinyurl.com/5fpewl

The letting of the contract for construction of what was to become the Vale Theatre was announced in Boxoffice, May 4, 1946. The new house was to be operated by Ted Wilson, operator of the Kent Theatre in Kent.

Before the Vale was completed, Wilson sold his entire operation in Kent to brothers Will and Roy Andre, operators of the Community Theatre in Tacoma, according to Boxoffice of November 6, 1946. The Vale probably opened later that year or early in 1947. The Vale was still being reported as owned by Will Andre in issues of Boxoffice as late as 1954. After that I don’t find it mentioned at all.

the vale was going well into the mid 1960’s. not sure why someone would say is was razed in the 50’s.