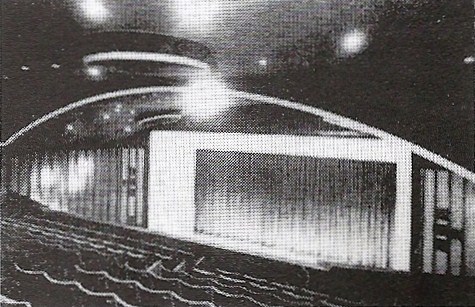 Originally opened in 1913 as the Electric Picture House, it was located on Bristol Street on the corner of Wrentham Street. Within a year of opening, it had changed its name to the Bristol Street Picture House. It was owned by the Hewitson’s of Smethwick. In 1923, it was demolished and a new cinema was built to the plans of architect Horace G. Bradley, known as the Broadway Cinema. It was owned by the Victoria Playhouse Group who also owned the Era Cinema, Bordsley Green and the Warwick Cinema, Acocks Green.

In 1956 all three cinemas were sold at auction to the Rogers family, but a week later the Broadway Cinema was purchased by the Jacey Cinemas chain. The Broadway Cinema was remodelled to the plans of architect H. Werner Rosenthal, and re-opened on 26th April 1956 as the Cinephone Cinema with Martine Carol in “Nana”, and Martin Carol attended ‘in person’. Style was Modern Continental, with 880 seats in stalls and circle. There was a Continental style coffee/snack bar. The Jacey Cinemas chain also owned the News Theatre and the Tatler Cinemas in Birmingham.

It was later taken over by the Gala Cinemas chain in September 1977 and was re-named Gala Cinema. This was later closed and tripled with the three screens seating 600. It re-opened 3rd December 1980 as the Climax Cinema Club which screened uncensored sex films up until 1984. It was afterward demolished, with a car showroom built on the site. By 2021 the site had been cleared to build housing on an extended site.

I was second operator there in 1959-60. Projection equipment was two BTH Super MK2’s, using Xenon arcs with all lighting controls motorised.

The projectors had to be put on one foot stands to clear the heads of the people in balcony, the theater also featured a floating screen with a white picture frame and no masking for regular size films and cinemascope, the manager at the time I was there was Mr Ron Catton, he lived in Sutton Coldfield.

I can remember one day the cast of Crossroads TV show came to the Cinephone for a visit, Sandy came to the box for a tour, do you remember that show, Audrey from Coronation Street was in it.

I can remember one day the cast of Crossroads TV show came to the Cinephone for a visit, Sandy came to the box for a tour, do you remember that show, Audrey from Coronation Street was in it.

exterior shot taken around 1990 when the Fiat dealership had moved out, by this point you could wander into the derelict building, the interior had been stripped back to plain concrete walls, wish i had taken more photos
View link

In 1956 The Broadway Cinema was Taken over by the Rodgers Family (Victory Playhouse Group) Who bought it with another 2 Cinemas Warwick Acocks Green and the Era Cinema.. at an auction selling 1 Week later to Jacey Cinemas..

This was our cinema so I believe many of your readers could be interested to know more about my late Grandfather Joseph Cohen. I have only recently added to my website ‘The History of Jacey Cinemas’ with over 300 images of press cuttings and photographs from the early 1930’s onwards. He was also involved in property and other projects, so there is a lot of information about him (not previously available on the Internet). Please do have a look at: – http://www.jncohen.net/JaceyGroup/JosephCohen.htm

Cinephone seen here (in the first few seconds of this mini-video) during its avant-garde early 1960s period http://www.macearchive.org/Archive/Title/midlands-news-15111963-sex-film-at-the-cinephone/MediaEntry/6606.html