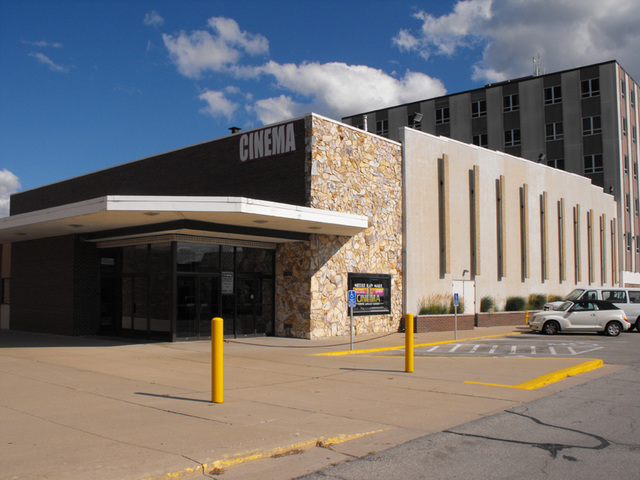 The Merle Hay Plaza Theater was opened by Tri-State Theatres on January 28, 1966 with Richard Burton in “The Spy Who Came In From the Cold”. It was equipped to screen 35mm, CinemaScope, 70mm, Todd-AO and single strip Cinerama. It was closed in the late-1980’s. It reopened a few years later as the Merle Hay Mall Cinema. It was closed December 15, 2014.

(Not to be confused with the Flix Brewhouse which opened in the Merle Hay Mall on December 17, 2014 and has its own page on Cinema Treasures).

Before it “officially” re-opened in the fall of 1993, they had special screening on the four weekends leading up to to the grand re-opening to test the new sound systems. They showed The Empire Stirkes Back, Raiders Of The Lost Ark, Top Gun and Days Of Thunder. Also they will occasionally show limited-run (one week) revival screenings in the spring and fall between tentpole season. One of those was Lawrence Of Arabia and I got to see it in all of it’s 70mm glory.

And yes, it is still the biggest regular theater screen in Des Moines. The only one larger is the IMAX Dome that opened downtown a few years ago.

The Merle Hay Mall Cinema was formerly the “Plaza Theatre” – when it opened c. 1967.

This opened as Plaza on January 28th, 1966. I uploaded it’s grand opening ad in the photo section.

I am sad that this theatre will close. The new theatre at Merle hay sounds nice, but this has such a great sized screen. Sad to see another single screen theatre with a big screen go away. I wonder what they will do with the space once it closes.

This theatre should be listed as closed.

The theatre is still open for a little over another week. Their last day is December 15th. Wish I could make it, but I’ll be too late. I don’t want to see Hunger Games, but since I won’t make it anyway the point is moot. It would be cool to buy one of the seats.

What is the current status of this wonderful big screen theater? I am still angry that the River Hills and Reviera are both gone. Don’t get me started about the Paramount downtown. Has the MH Cinema been stripped out completely? Is it even still standing?

The space is vacant, but the building is still standing. To the best of my knowledge, the chairs were sold, but I’m not sure about the projector or the rest of the theatre.