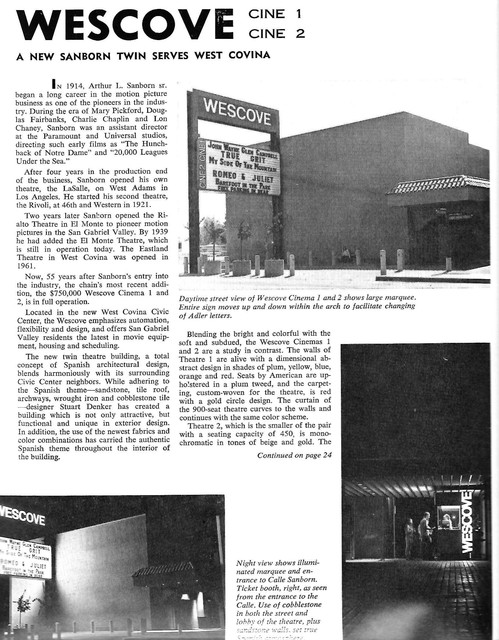 Theater one: Seating 900, according to the newspaper it was one of the largest screens in the San Gabrial valley. Every new movie that came out was shown there. The first time I ever heard Dolby 6 track sound was there. It also had a giant curtain that was working the last time I saw a movie there, which was 1992.

Theater two, originally seating 450 was later twinned making very small box like theatres. The main screen was the atraction at this theatre.

One thing that really sticks out was that the inside of the main lobby was always dark. Execept for the snack bar area. That was brightly lit up. The ticket booth was located outside away from the building. You would buy your ticket and then turn and walk inside the building. The Westcove Cinemas closed on April 5, 1997.

Last time i passed there in March 2006, this theatre was in the process of being demolished. Another theatre lost.

I saw many movies at the WesCove growing up in the area. I also saw “The Empire Stikes Back” there. A big movie for me there was “Phantom of the Paradise” which opened there in 1974. Although it quickly came and went from that theatre and elsewhere, somehow it played 62 weeks in Winnipeg and the 30th anniversary of this film with the main stars and fans from around the world is taking place in Winnipeg on April 29, 2006 www.phantompalooza.ca In a sad coincidence, I just drove past the theatre this morning April 27, 2006, and it is now rubble :( They must have torn it down yesterday afternoon because it was still there yesterday. Very sad that no one lobbied to keep this 70mm theatre for a civic auditorium or other uses. Now it will be part of the parking lot.

Woody Allen’s first breakout movie played there — 1969’s Take the Money and Run. It was always a triplex

WEST COVINA-Construction is under way on twin motion picture theaters on the south side of Service Ave. across from the Civic Center. The Wescove Cinema, being built by Sanborn Theaters, will feature auditoriums with 900 seats and 450 seats, respectively. There will be a common lobby, projection booth and walled-in patio.

It was noted back in April 2006 that the theater had been razed, so the status should be changed to closed/demolished.

A Boxoffice Magazine item from the issue of September 15, 1969, confirms that the Wescove opened as a twin, on August 20, 1969. Boxoffice named the designers of the theater as the South Pasadena firm of Smith & Williams.

Whitney R. Smith and Wayne R. Williams were very well known for their midcentury modern designs, but this is the first I’ve ever heard of them designing a theater. I wonder if they did any others? It would really bite if somebody has knocked down the only Smith & Williams theater in the world for a parking lot.

The Wescove had become a triplex by August, 1986, when it was being operated by SoCal Cinemas (the Sanborn Theatres circuit’s later name.) Their listings gave the address as 1450 West Covina Parkway. The house had still been listed as a twin in the Independent Theatres listings of the L.A. Times in February, 1971.

Like so many other theaters at the east end of LA county, the entire structure has been gone for the better part of three years, or so. Depressing.

For its part, the Wescove was certainly an interesting one, with a large screen on the south side of the theater (I remember that slow retreat of the curtains from its center as the lights dimmed), and a slightly smaller screening room on the north.

After a few years, the smaller of the two was split into two screens so as to render the cinema a tri-plex. This allowed for a major film – say, “The Deer Hunter” – to play in one theater, while another reputable release like “Invasion of the Body Snatchers” might be found in the second screening room. Fare such as “Laserblast” and “Patrick” could be found on the third screen.

The sensibilities at the time of the Wescove’s opening were such that they had a blown-up series of black and white photos of a nude woman adorning an interior wall. This larger than life motif was on the north wall of the number two screening room. It remained like that for years (neither my parents nor I had any problem with the nudity, but I wonder how such a thing would fly today).

The south and north side screening rooms were themselves separated by a concession stand that basically bifurcated the theater. For a time, the theater was owned by the Sanborn’s, who also owned the Eastland theater in nearby Covina. They must have done pretty well for themselves because I recall that both the ticket and concession prices were higher than those of other area theaters. Arguably, it was worth it because for a time they did a good job of keeping the theater clean.

Like Brenda, I recall seeing “Phantom of the Paradise” there, as well as “Rocky Horror” (I’m a bigger fan of the former).

Other films included “Butch Cassidy and the Sundance Kid”, “Vanishing Point”, “Play Misty for Me”, “MASH”, “Cactus Flower”, and many others. The biggest crowds were for “Towering Inferno”, “Jaws”, “Smokey and the Bandit” and “Star Wars”.

In the early 70’s the wescove definitely had only 2 screens, and it was quite stylish…then of course when the idea of doing multiple screens came in years later, they ruined it!
It was a wonderful place to see a film back in the day…and they
wallpaper was pop art! nice.