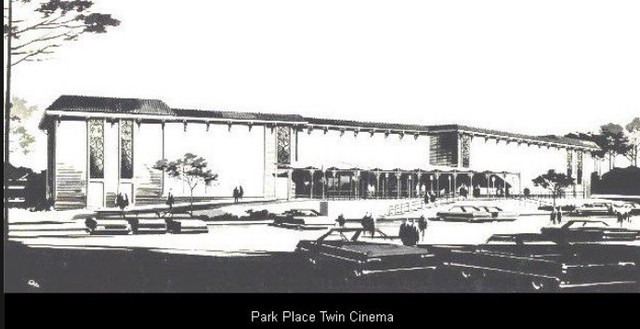 The Park Plaza Twin Cinema was the first theatre in the Port Arthur, Texas area that had more than one screen. Seating was provided for 660 and 440.

Litigation was afoot in August 1975:

Hayes and Hayes Inc are saying they suffered over 5 million in damages as a result of Solomon’s “maneuvering”, while Park Plaza claims it lost over $500,000 in revenues from what they call his “anticompetitive and unfair tactics ”.

Mid-County Enterprises say the defendants overt threats prevented
them from building a planned drive-in theater and lost them over $1 million. They are asking the court restrain defendants from further alleged violations of anti-trust laws and for recovery of damages in triplicate.

Also during this same period of time, the suit says that Hayes contacted investors with the idea of building a drive-in
theater on the northwest side of Port Arthur. Mid County Enterprises Inc. was organized June 19, 1972 and they leased a tract of and along U.S. Hwy 69 planning to build a drive-in theater there.

But this plan was halted, they say, when Solomon told them if they build the drive-in, he would retaliate by building one directly across the road from them. Since defendants already owned the
Don Drive-In, and the newly-formed corporation would not have been able to undergo a sustained period of loss, the drive-in idea was aborted, the complaint states.

The opening of the Plaza was advertised in the Port Arthur News on June 19, 1968. Opening features were “Bandolero” and “The One, the Only, Genuine, Original Family Band”.

Thanks, Ken MC. I uploaded the grand opening ads at View link

I worked there for a few years starting in 1983. The small auditorium had 440 rocking seats and the larger auditorium had 660 standard theater seats. My starting salary was $5 for a 6 hour shift.