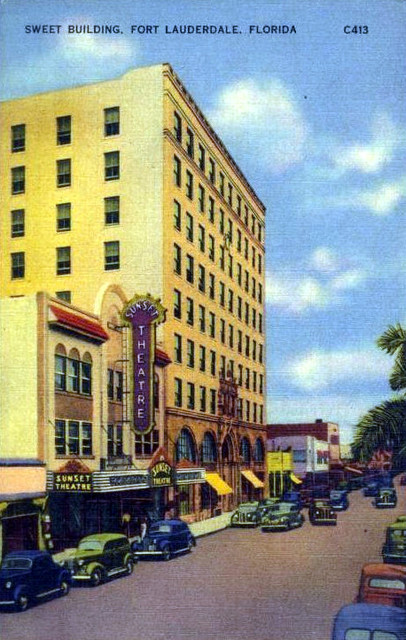 Standing next to the Sweet Building (today known as One River Plaza) on S. Andrews Avenue at Las Olas Boulevard, the Sunset Theatre was opened December 24, 1922. By 1941 it was operated by E.J. Sparks, a subsidiary of Paramount Pictures Inc. It was closed in 1953. It has since been demolished and a parking garage now stands on the site.

The Sunset was opened on Christmas Eve 1922 at South Andrews and Las Olas next to the “Sweet Building”. This would be Fort Lauderdale’s first theater. It initially seated 989 patrons. It closed in 1950. Florida States Theaters owned this theater.

Judging from Google Maps, the building next to it in the 40’s postcard is still there, but the theater is now a parking garage

From the 1940s a view of Andrews Avenue along withe the Sunset Theatre on a postcard and a photo postcard in Fort Lauderdale.

The map given above is south of the Sunset’s former location; it was just a block or two south of Las Olas Boulevard, around the corner from where the Las Olas Riverfront 15 shows movies today.

The above ‘Sunset Theater’ in Ft Lauderdale was later reopened as ‘The STATE Theater’ sometime during the 1950-1960’s. As a kid in those years, I used to frequent this theater on a weekly basis. They became famous for showing mostly B-films of the Sci-Fi/Horror genre and teen flicks (along with other standard fare features of the times). I can seem to find absolutely NO information regarding this theater when it became “The STATE”. Would love to see any old photos which featured the marquee sign showing that change. I believe that I finally closed forever in the early 1970’s.

triassic4, I found some references to a STATE Theatre in Dania but not in Ft. Lauderdale.