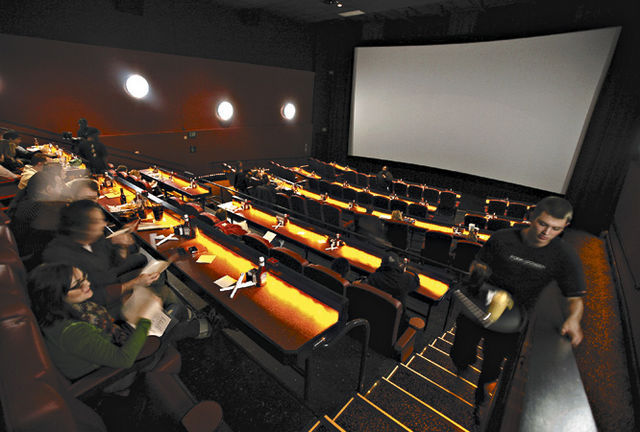 The AMC Studio 30 Theatre (originally AMC Olathe Station 30) was one of three new megaplexs to open on December 19, 1997. The other two megaplexes to open that day are AMC Town Center 20 and AMC Barrywoods 24. The name of this theatre when it opened was Olathe Station 30 for the name of the shopping center it was in but the name only until July 3, 1998 when it was renamed to its theme name as Studio 30.

This theatre features 29 screens including one IMAX screen in three themed wings ranging from 100-550 seats. The theatre also features a concession stand in each wing, a small coffee shop in the main wing, an arcade room and plenty of bathrooms areas.

The wing to your left is the Action/Adventure Wing which has 13 screens (and one dark screen), it has bamboo and rock directional signs, color changing eyeballs look at you in the hallways, and has the look of a rain forest.

The wing to your right is the Animation Set Wing with 14 screens, it features ceiling tiles that are supposed to look like clouds in a blue sky but look like giant popcorn instead, and it features blimp directional signs.

Like some of the other 30 plexes in the AMC chain they had darken three of its screens (theatres 1-3) in 2000, because there wasn’t enough product to fill those screens and AMC wanted to see if they could put a restaurant in that spot. But AMC never put a restaurant in that spot and reopened two of those screens (theatres 2 and 3) a couple of years later leaving one of them dark. The one that was left dark was claimed to be used for testing stuff (I don’t know what they’re testing for in a 100 seat theatre) to put in new AMC theatres. To this day theatre 1 is still dark and this theatre continues to operate with 28 screens.

There are two other AMC theatres to use the Studio theme that I know of, the Studio 30 in Houston, TX and AMC Mesquite 30 in Mesquite, TX (Dallas/Fort Worth area).

Here’s an article about the renovations at the theater:

AMC Entertainment Inc. said Friday that the renovated wing of AMC Studio 30 will open to the public Oct. 31.

The Kansas City-based company said in a release that it has transformed an entire wing of the Olathe theater into Fork & Screen, which includes casual, in-theater dining and entertainment; Cinema Suites, an upscale in-theater dining and entertainment option; and MacGuffins, a bar and lounge area. AMC Studio 30 is the first AMC location in the country to feature all three test concepts under one roof.

â€œThe Fork & Screen test concept transcends anything our guests have seen before, and we look forward to everyone in our hometown experiencing this flagship location,â€ AMC Entertainment CEO Peter Brown said in the release.

Fork & Screen will feature eight auditoriums reserved for customers 18 and older and minors accompanied by a parent or guardian. Customers 21 and older can upgrade to one of three Cinema Suites auditoriums featuring reserved seating.

A very nice theater. Watch out for teen friendly flicks as we actually left without watching the movie we were going to pay for as it was very loud.

It’s hard to imagine – Olathe KS has a NEED for 30 screens? Very impressive nonetheless. I especially liked how you could pay for your popcorn and soda, get a printout ticket of it, and walk to an express lane to get it without waiting. Very nice!

Olathe is a suburb of Kansas City (of which the metropolitan area is full of megaplexes). AMC just wants to serve their homebase with a large theatre. And the theatre actually has 29 screens.

I saw one movie here last year, Paranormal Activity (while it was still in limited release). Played pretty well in the 600+ seat auditorium it was showing in.

I saw Buried last month in one of the small auditoriums (it was the only theatre in Kansas City running it). The auditorium had digital projection (as with most, if not all auditoriums there) and leather (possibly pleather, but still) seats, amazingly enough. Despite several people walking out after 30 minutes (the film was an arthouse drama rather than the horror film it was promoted as), it was a great theatre experience.

The screen count needs to be updated to 28 as a result of the fork and screen renovation that gutted out Auditoriums 1 & 13 as part of the expanded lobby on that end. The official theatre name is AMC Studio 28 with IMAX and Dine-In Theatres despite the sign out front still has the old name of Studio 30 on it.

The AMC Olathe Station 30, Barrywoods 24 and the Town Center 20 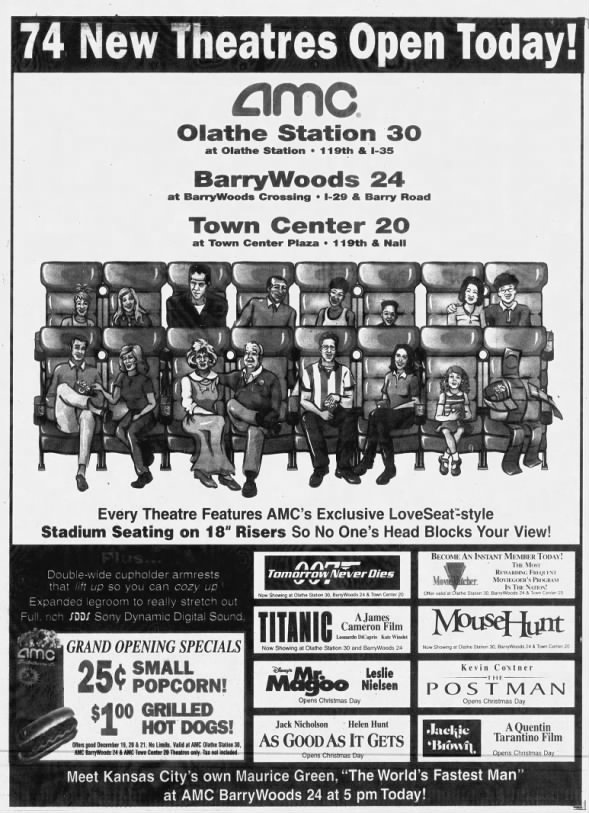