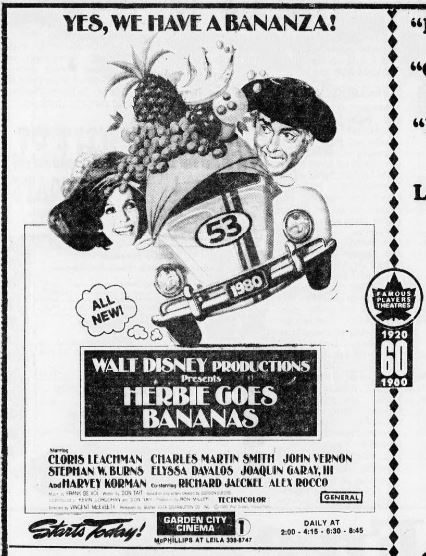 The auditoriums are bathed in red, orange and purple, while the lobby is bare plain white with many windows.

“Famous Players Theatres' Garden City Cinema located in the Garden City Shopping Centre, McPhillips at Leila opens on August 12, 1970 in Winnipeg. First manager is Dennis Singbiel. Theatre is said to be one of the most technically advanced in Canada and has a seating capacity of 746. Opening feature is “Suppose They Gave a War and Nobody Came”. Twined on December 7, 1979, with “Star Trek – The Motion Picture” in Cinema 1 and “The Bugs Bunny/Road Runner Movie” in Cinema 2. Ownership change to Cineplex Entertainment on September 30, 2005. Closed on August 5, 2010 with “Inception” in Cinema 1 and “Mel Kara De Rabba” in Cinema 2.”