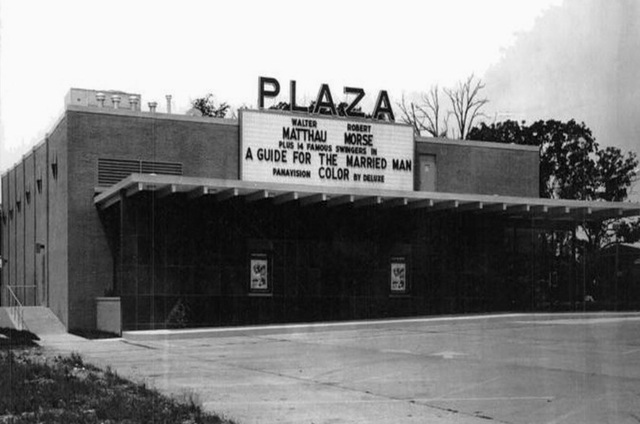 Built much like the Plaza Theatre in nearby Des Moines, the Cedar Rapids Plaza was an 800-seat single screen theater and was located on the south side of Lindale Plaza. It was opened by Tri-State Theatres on June 30, 1967 with John Wayne in “The War Wagon”. Later operated by ABC Midwest Theatre and JSB Midwest Theatres.

It was closed by Dubinsky Brothers on December 3, 1987 with Jason Bateman in “Teen Wolf Too”. The Plaza is currently home to a ballroom.

As referred to above, this theatre was one of three built in the middle to late 60’s by ABC/TriStates Theatres. (The third was the Parkway/Moline,IL. All were designed by Henry George Greene of ABC Theatres.) All three featured rocking chair seating, large screens complete with drapes and 70mm projection. Because of their basic floor plan, they were extremely efficient theatres to operate. I managed this theatre for about a year, and relieved managers for vacations in the other two. I refer to these theatres and others like them as the “second generation” of movie palaces.

In the early 80’s the theatre was converted to a nightclub- then an office supply store. Currently it has been renovated into a ballroom called “Let’s Dance”

Now the Ballroom is outta business

Here is a 1970 ad from the Cedar Rapids Gazette:
http://tinyurl.com/ysgq9h

Cedar Rapids: Downtown and Beyond, by George T. Henry and Mark W. Hunter, says that the Plaza Theatre opened in the summer of 1967 with The War Wagon, and closed in December, 1987.

This opened on June 30th, 1967. I uploaded its grand opening ad and picture here.

The Plaza throughout its history was first operated by Tri-States Theatres, followed by ABC Midwest Theatres, JSB Midwest Theaters, and lastly the Dubinsky Brothers.

In early October 1975, one of the glass plate window-doors was destroyed by an unknown person using a slingshot, breaking the door and a lead-sinker.