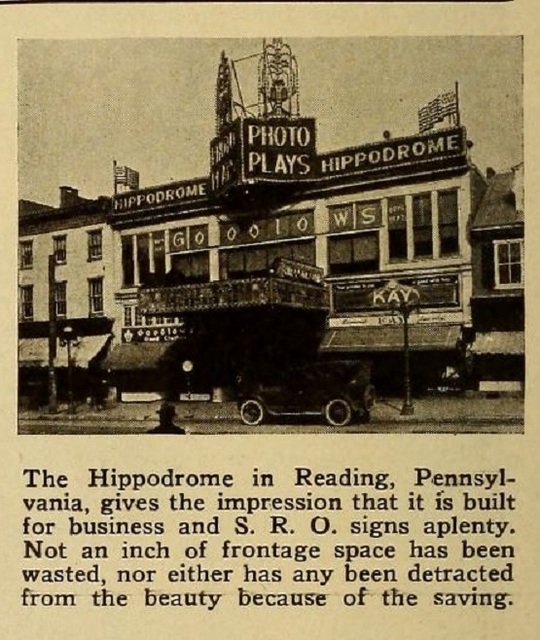 Originally opened as the Hippodrome Theatre in 1910 as a vaudeville theater located on Penn Street near Eighth Street, this theatre was rebuilt in 1925 as the State Theatre. In 1941, it was modernized and renamed the Warner Theatre.

The Warner Theatre closed in 1963, and was demolished in the 1970’s to make way for part of the Sovereign Center’s parking lot.

Another Warner gone to make way for part of a parking lot? I’m researching Warner theatres and would love to see a photo(s) of this one.

What a cute little theatre that is no more! Any interior photos?

By the late 50’s, the Warner was kink of dumpy. The interior was nothing very classy. This was located a couple of doors north of the Embassy Theatre, one block north of the Lowes Colonial and accross the street from the Astor. These were large art deco buildings and as a former Astor usher I can tell you that the Warner was sneered at. We used to refer to the Warner as “the Dinky” because it was so small.

The address currently given for this theater is wrong. JimmiB says (the preceding comment) the Warner was across the street from the Astor and a couple of doors from the Embassy. The Embassy had an odd numbered address and the Astor an even numbered address, so the Warner must have been odd numbered as well. In the 1945 photo ken mc linked to above, the Progressive Outfitting Co. next door to the Warner’s entrance looks like it has an address of 751, so the theater must have been at 753 Penn.

When Stanley Warner closed the Warner and gave up the lease it was at that time also operating the Colonial down the street. They did not want to bother to take out the seats at the Warner, however in order to make it more difficult for someone to come and resume operations at the Warner they had a small bobcat come in and bulldoze and knock over all the seats in the auditorium so that it could not be easily reused as movie theatre. That the way business was done in those days. Gene Plank from the Embassy showed me the pictures of the bobcat plowing down the seats.

Never heard the story of the bobcat. Pretty cool!
Nice to hear from someone else who knew Gene Plank. He was a heck of a nice guy.

The Hippodrome was mentioned several times, though not by name, in various issues of The American Contractor in early 1910. One item in the May 14 issue, announcing the completion of the plans by the architectural firm of Muhlenberg Bros., gives the address of the proposed theater as 751-57 Penn Street. The theater was being built for a Mr. Abe Zable. The seating capacity was given as 960, so the 1925 expansion must have been fairly large.

I’ve been unable to discover the architect of the State Theatre project, but the Muhlenberg firm was still listed in the AIA directory at least as recently as 1962, so they would have been around in 1925 and could have designed the expansion as well.