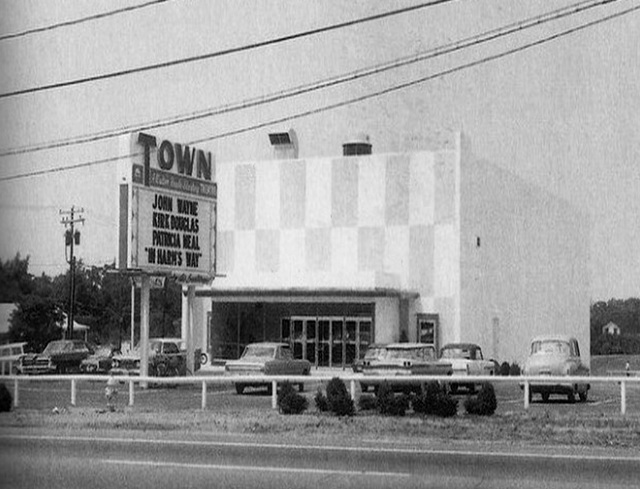 The Town Theatre was located on Route 35 and Palmer Avenue. It opened June 30, 1965 with James Garner in “The Art of Love”, it was originally a single screen theatre with 875 seats. First operated by Walter Reade Theatres, they opened a second screen named Town East on August 18, 1971 named Town East. In November 1976 it was owned and operated as a United Artists theatre, renamed UA Town East & Town West. In 1977 the Town East was twinned. Four more screens were added in December 1980.

After a decline in its use thanks to the newly opened Hazlet Multiplex Cinemas, it became a discount theatre operated by Cinemagic Theatre company, who twinned the original #1 screen. It closed its doors May 7, 1998. It was knocked down and replaced by a Target.

The original name of this theatre, now demolished, was the Towne and opened in July 1965 under the Walter Reade Theatre banner. It became, under Music Makers, Town East and West and then gave birth to multiple screens over the years. As National Amusements, Sumner Redstone, replaced the Rte 35 Drive-In with the Hazlet Multiplex Cinemas in August 1992, the decision was made to have the property used for other commercial ventures.

Wow, Tinseltoes! Thanks for that BOXOFFICE cover with the Town auditorium on the front. It was pretty neat to see it again. I remember sitting in that 1,000 auditorium to see AIRPORT back in 1970 (June, I think), and it was so crowded that some members of our family had to sit separately from us.

I watched the Star Wars Special Editions there, all 3 of them. Since this was a 2nd run theater at the time and Jedi came out in May, it would have been at least summer 97 that it was open. It wasn’t open long after that so chances are it was at least in calendar year 97 that it closed.

Not much effort was being put into it at that point. The seats were broken down, the place was disheveled and some nights they weren’t bothering to sell you tickets, they just let you in.

I’d imagine that was after Target was well on it’s way..

Just to capture some of the comments above: The Town Theatre was a Walter Reade-Sterling project architected by David Marner. Marner was at the groundbreaking of the theatre along with Mayor Ernest G. Kavalek. The lobby featured an art gallery to promote local artists.

Launched June 30, 1965 with a special screening of “The Art of Love.” Walter Reade circuit added to the complex on August 18, 1971 with a second auditorium called the Town East playing “Le Mans” with the Town West playing “Morgan the Pirate.” David Marner also architected the 500-seat Town East which shared a common box office with the Town. Its new name was the Town Theater East & West.

In 1974, Walter Reade sublet the theaters to Coast Theatres Circuit which operated the duplex until going out of business in October of 1975. After returning to Reade for a month, the Town East & West was sublet to S.W.K. Theatre Circuit of Pleasantville in November of 1975. The theatres were returned to Reade in the Summer of 1976.

In November of 1976, UA took on the theatre calling it the UA Town East & West. But the circuit closed the East Theatre and twinned it. When it re-emerged on March 16, 1977, UA called the triplex the UA Middltown Theaters 1, 2 & 3. Theaters 2 and 3 were each 300 seat auditoriums. The $250,000 renovation also included new automatic projectors and a light machine producing multiple colors on the screen between shows.

In July of 1980, United Artists Theatre Circuit broke around to add four screens to the complex bringing the seat count to 2,200 with auditoriums ranging from 186 to 248 seats. The additional screens came online on December 19, 1980 with new projectors and Dolby Stereo in all auditoriums under the new moniker of The Movies at Middletown.

Competition from modern multiplexes caught up to the theatre which tried different pricing policies including a flat fee with free popcorn followed by a sub-run, deep discount pricing policy. UA closed the theatre on August 19, 1996.

On October 4, 1996, Cinemagic took on the theatre continuing its operation as a sub-run discount theatre called Cinematic Movies at Middletown. The theatre struggled and finally was shuttered on May 7, 1998.

Fond memories. I was the weekend relief projectionist (12 noon-6p) for a couple of years in the late 70s. The primary projectionist for many, many years was James Letts. A nice guy who could fix anything.

KGordonMurray, there is a guy named Jimmy Letts who does rigging at the arena in Newark. He is a 536 member and works at the Arts Center during the summer. I asked him once if he had a projectionist in the family and said he did. He also stated to me that I as a projectionist was a loser. I now go out of my way to avoid him. I have been doing the job for 43 years.