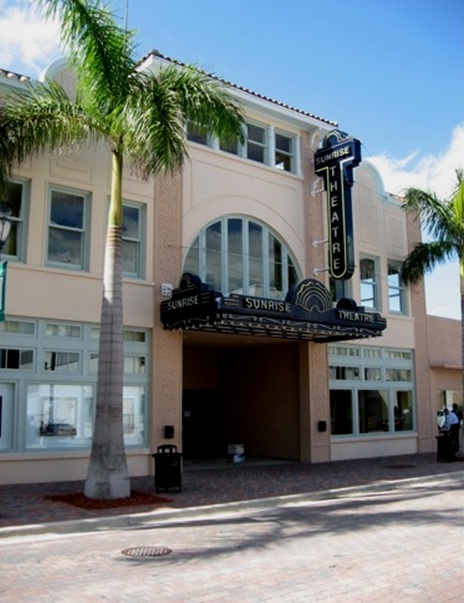 Mediterranean-style vaudeville house which opened August 1, 1923 in Fort Pierce, Florida. For years it was a movie theater and by 1953 it was operated by the Talgar Theatre Company chain. By 1968 it was operated by Kent Theatres Inc. It was closed in 1983 with the deterioration of downtown. It reopened January 14, 2006 as a performing arts center after a $13 million rehabilitation, largely paid for with city, county and state funds.

A good friend of mine who lives in the West Palm Beach area sent me an article about this theatre. The following site is a link about the Sunrise and its beautiful restoration:

The Sunrise was built in 1923 by citrus king, Rupert “Pop” Koblegard when the city’s population was barely more than 2,000. The Sunrise’s restoration has been more than a decade in the works, beginning with the city’s Main Street program’s efforts to revitalize downtown. By the mid ‘90’s, the organization acquired the theater, which is listed on the National Register of Historical Places, and set plans in motion to renovate it. Construction finally began in 2002. Along the way, theater leaders and civic boosters had to raise the money, which came from both public and private sources.

Paul: I see that you do not provide your email address on your profile page so please go to mine and send me an email as I would like to ask you more about the Sunrise Theatre. Thank you.

For anyone in the Ft. Pierce area who wishes to experience the restored Sunrise Theatre click on Sunrise Theatre in blue below Related Websites and the upcoming performances are listed.

IAstage played a major role in the renovation process providing all stage machinery systems including, motorized hoists, controls, counterweight rigging, draperies and track. The rear of the auditorium has acoustic draperies on tracks that are used to divide the audience chamber from the foyer.

The new marquee pales in comparison to the one in the 1981 picture. I guess that one was removed after it closed.

Thanks for the photos Andy.

A 1918 Sanborn map shows a Crystal Theatre on the property, with an abandoned movie theater immediately to the south.