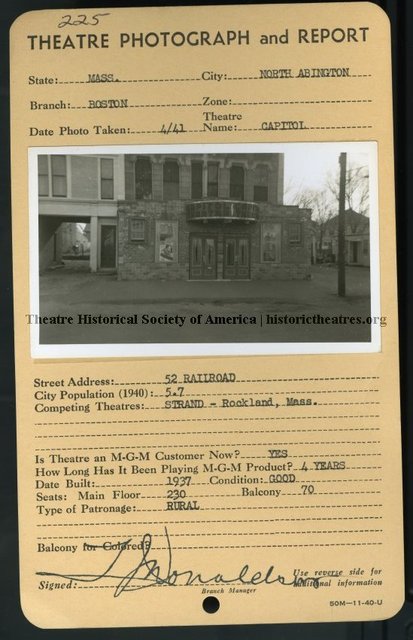 The Capitol Theatre was located across from the North Abington railroad station (now a restaurant) and was created in 1937 within an existing 19th century building. It had a balcony, and may have been an “upstairs house”. In the 1940’s, local children called it “Joe’s Theater” because the popular manager was named Joe. I suspect that it did not survive the 1950’s. However, it remained standing and empty right into the 1990’s.

The Capitol had 230 seats on the main floor and 70 in the balcony. Outside, there was a half-circle marquee over a ticket window and a pair of doors. The competition included the Strand Theatre to the east in Rockland; and the Cameo Theatre to the north in South Weymouth. Plus, there was a Drive-in theatre, whose name I don’t know. It was located a short drive to the north on the west side of Route 58, just south of the Weymouth line. The marquee and the frame of the screen lasted until the 1990s, when the site was finally built upon. Both the remains of this drive-in and the Capitol Theatre were torn down within the past 10 years or so.

Ron – The name of the drive-in on route 58 was, simply, the Abington Drive-In. The marquee was still there until about 5 years ago. I visited the site then, though there was not much to see. I have been told that this drive-in was only around for a year or two in the late sixties, though I have no way of knowing if this is accurate. Supposedly, airplane traffic from the adjacent Naval Air Station created quite a bit of noise and quite a bit of distraction during the films, enough so to close the place down…

Thanks for the comments about the Abington Drive-In. It was indeed very close to the South Weymouth NAS runways ! I drove up and down Route 53 many times from mid-1950s onward en route to the Edaville Railroad in South Carver and simply can’t recall this Drive-In until I noticed it all overgrown with saplings and weeds circa 1980s. The marquee out on the edge of the street had a very 1950s look about it.

I meant to write “Route 58” in the above posting. Some 10 or 15 years ago I spoke to someone who grew up in N. Abington in the 1940s and he remembered the theatre across from the railroad station very well. He was the one who told me that it was called “Joe’s Theater” by area kids because the manager, Joe, treated them kindly. He did not recall the actual theatre name. The MGM Report calls it the Capitol Th.; however, the MGM Report, made at the same time, for the Strand Th. in nearby Rockland, refers to the competing theatre as the “North Abington Theatre”, not as Capitol Th. The closed-up building had no name on it when I first discovered it while admiring the ancient railroad station.

The Quincy Patriot Ledger of Aug. 16 has a feature article about “open air movies” which are run in the summer in Weymouth, Hingham and Hull which mentions local drive-in theatres of the past. It says that the Abington Drive-In, which was located on Route 58, just a short drive north of the Capitol Theatre, opened in 1959 and closed in 1966.

The 1927 Film Daily Yearbook lists one movie theater in North Abington, the Peerless Theatre with 300 seats, open 2 days per week. The seat count is the same as the Capitol, so I wonder if it was the same theater??

Mike L. of Abington worked briefly as an usher at this theater circa-1950. He said that to access the auditorium after buying a ticket, you walked up a staircase with 7 or 8 steps which took you to the rear of the sloping orchestra floor. There was also a small balcony, but it was closed and never used.

Mike L. also says that the nickname for this house was “Joe Mack’s Theatre” (although I have also heard just plain “Joe’s Theatre”).
Moreover, he is adamant that it’s not torn down and is still there. So I went back yesterday and checked— he’s correct. My mistake was in placing it directly across from the front door of the Abington Depot restaurant, when in fact it was down the street aways across from the far end of the restaurant parking spaces. He says that it was all intact,inside and out, until recent years, maybe about 2000 or so. It was used for storage; for example, there were 2 antique popcorn wagons inside. Now it has been totally rehabbed inside into office space and the sidewalk in front rebuilt so that there is even a little lawn in front of it. The address is 82 Railroad St., not “52” as on the 1941 MGM Report.

Warren S. tells me that he lived in North Abington until 1942 just a very short walk from the rail station and the theater. He went to the movies there many times. He says that it was packed, mostly with kids, during Saturday matinees. He can’t remember the ticket price but says it could have been no more than 25 cents. There were 2 feature films, a serial, some cartoons, and sometimes a newsreel. He doesn’t remember what the proper name of the theater was.