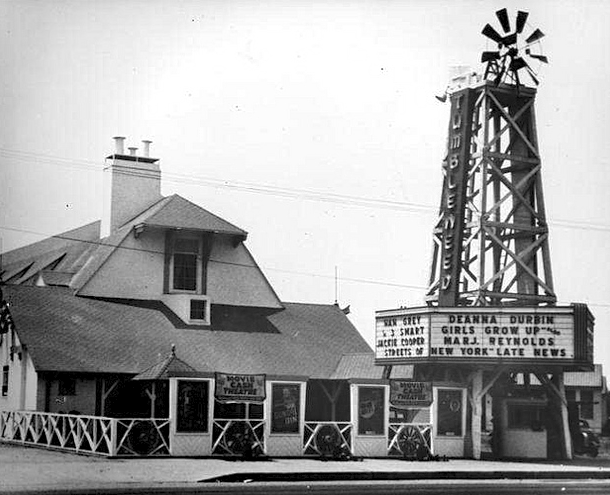 The Tumbleweed Theatre was designed by architect S. Charles Lee for a client with limited capital who needed the theater for film-buying purposes. This particular client said he would accept anything, even a barn, as long as it had a projection booth.

So, Lee designed the exterior of the building to resemble a barn surrounded by a farmyard. Above the marquee stood a wooden tower topped by a windmill. The auditorium had an open-beamed ceiling with wagon-wheel light fixtures and murals of mules and cactus. The creative design was simple and inexpensive, yet captured the mood of the theater’s isolated location.

The Tumbleweed Theatre opened in 1939 and was demolished sometime before 1970.

Though the style of the Tumbleweed is designated above as “Atmospheric,” it was not a true atmospheric theatre. The ceiling did not depict a sky, but was a structure of open trusses and exposed rafters, as can be seen in this photo from the S.C. Lee collection at UCLA. The style of the theatre, both inside and out, could be more accurately described as Rustic.

My comment of October 20, 2005 above contains and error of fact. Architect Clifford Balch was not the father of William Glenn Balch, but his (considerably) older brother. This is not related to the Tumbleweed Theatre, but since I have no way of editing the older comment I wanted to point out the error so as to reduce the chances of it being perpetuated.

What does have to do with the Tumbleweed Theatre is the current classification of its style as “Oriental” at the top of this page. Oriental is no more accurate than was its earlier classification as “Atmospheric”.

The Tumbleweed had an American farm-style windmill out front!

Wagon wheels were featured as part of the decoration!

The walls were decorated with cartoons of such icons of the American west as an Indian on a pony, cacti, and a burro harnessed to a Mexican carreta! Not to mention the fact that the chandeliers repeated the wagon wheel motif!

While it is true that the plant after which this theatre was named is native to the steppes of Asia (and is also known as Russian thistle), there was nothing else about this theatre that was characteristic of the east, far or near. I still say that the style of the Tumbleweed could best have been described as Rustic.

Here is a photo circa 1940s:
http://tinyurl.com/cuzmpd

The sign giving the admission price as 30 cents dates this photo to the 1950s. Until the Federal tax on theater tickets was repealed (I can’t recall the exact year, but it was in the early-to-mid 1950s), the Tumbleweed’s sign said 25 cents. Tickets had actually cost 30 cents with the tax, and when it was repealed Edwards simply added the nickle to his admission prices.

Here is a January 1955 ad from the Covina Argus Citizen:
http://tinyurl.com/cryfbd

The location of the Tumbleweed Theatre should to be changed to El Monte, California. Although local residents called the small section of El Monte in which the theater was located Five Points, so named for the intersection of Valley Boulevard, Garvey Avenue, and Cogswell Road, the only place in California that was ever officially called Five Points was, and is, in Fresno County.

The approximate address of the Tumbleweed Theatre was 11928 Garvey Avenue. A free-standing El Pollo Loco restaurant has been built at that address (Bing Maps bird’s-eye view) in the parking lot of the Five Points Shopping Center, and it is almost exactly where the theater was in this 1939 photo.