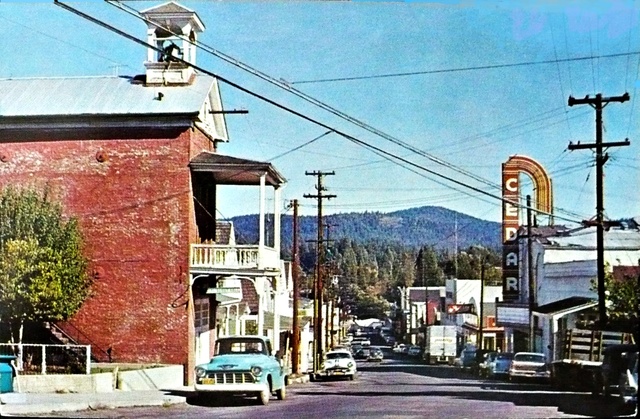 The Nevada Theatre building was built in 1865.

It was reopened around 1977 as the Nevada Theatre

I visited this theatre in the early 1990s. It was being used for plays. Since the interior had a plain Moderne look that clearly evidenced that it had been used as a movie theatre, I asked someone there why the stylistic difference between exterior and interior? They replied that the 1940s facade had been removed in order to reveal the original, 1860s facade. I’ve seen a photo from the Steve Levin Collection (now part of the Theatre Historical Society Collection) taken by insurance photographer Ted Newman sometime around 1942-‘45 that shows the 1860s facade to have been fully intact then, save for a horozontal swing-out sign of neon, “Nevada Theatre.”

From the 1950s a photo postcard view of Broad Street along with the Cedar Theatre in Neveda City.

I don’t know if there was a relationship to the Broadway Theatre at 409 Broad Street listed in the FDYs in the 1940s and early 1950s. Is it possible that Broadway Theatre was never an aka for the Nevada/Cedar Theatre? 409 Broad would have been a few doors up the hill from the Nevada Theatre. The buildings on that site now look like old houses converted to shops, but they could be newer construction in a vintage style.

This theater apparently runs as both a movie theater with a film series operated by the small Sierra Theaters chain, but it also is home to a number of live theater groups. Hence it has two official websites. The one for the theater groups staging productions there is: http://www.nevadatheatre.com/ and the one for the film series is http://sierracinemas.com/nevada.asp. {The current official website listed is a dead link).

And one of the guys from Buck Rogers in the 25th century works there!