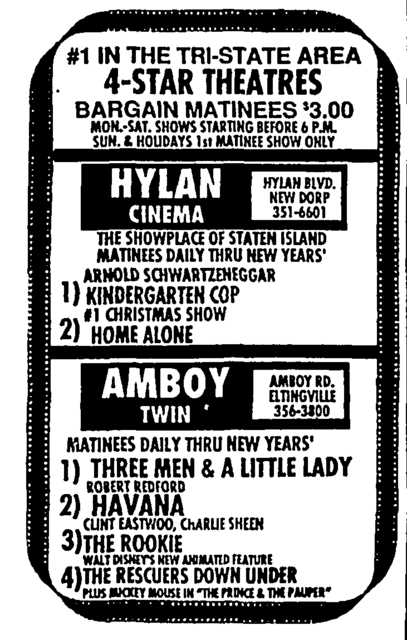 Located in the Eltingville district of Staten Island. The Amboy Twin was opened on March 25, 1977 with Michael Caine in “The Eagle Has Landed” & David Carradine in “Bound for Glory”. It was closed on January 27, 1994.

Was located on Amboy Road in large strip mall north of Richmond Avenue.

It’s a little missed. Do you have any idea how much of a pain in the ass it is for my kids to get to the UA Stadium by bus?

God, everything on Staten Island is hard to get to. I lived there from 1966 until 1988….and it just became an infrastructure nightmare…..I loved it, but I hated it…..

Born and raised here. I love it and hate it, too. I miss all the old theaters of my youth. The stadium’s OK, I guess. It’s definitely better than the SI 14 was, but, like the Jerry Lewis years ago, there’s nothing to do nearby, unless you like shopping at Home Depot.

When was Rocky Horror shown here? I’ve heard that it was, but don’t recall when.

This year’s New Directors/New Films series will test the mettle of potential audiences by offering Edgar Reitz’s ‘'Heimat,’‘ a German film that spans 63 years in the life of a fictional German village. ’‘Heimat’‘ is 16 hours long – yes, 16 hours. It will be shown in four four-hour segments in the Museum of Modern Art’s Titus 1 Theater over two successive weekends, beginning April 6-7; it will also be shown twice, in two eight-hour segments, in the smaller Titus 2 auditorium on the same dates. The New Directors series begins on March 29 and runs through April 14.

Staten Island, not often a site for movie premieres, will be host to the opening engagement of Sandy Tung’s ‘'Marriage’‘ today since Mr. Tung is a native son. In addition to the Amboy Twin on Staten Island, the film opens at the Embassy 72d Street theater in Manhattan today.

Mr. Tung made his largely autobiographical film about a marital breakup on Staten Island, and shot much of it in his own apartment. The film had a budget of $125,000, and was pretty much financed by the director himself. He has already visited the Amboy Twin to provide it with handbills about his film, and he concedes he’s a little worried. ‘'The film isn’t high-concept,’‘ he says. ’‘It doesn’t have a lot of sex and violence, it doesn’t have big stars and it has what you could call a grown-up theme. I think people in the suburbs might be interested in it, since that’s where the characters are from. But I go the movies in the suburbs all the time, and the average audience can’t be older than 18.’'

I saw flicks like “Xanadu” and “Down and Out in Beverly Hills” at the Amboy Twin. Also, I saw Sandy Tung’s “A Marriage” there; it played for a very short time back in 1985. And, contrary to what the above article says, I do remember a fairly explicit sex scene in it.
The theater’s screens stayed the same size no matter whether the movie was shot in wide-screen or normal aspect ratio. That always annoyed me. Also, I can’t remember if that theater was equipped with Dolby, or even stereo, sound.

There is a Perkins Restaurant at 4370 Amboy Road. It’s not clear to me if the restaurant is in the old theater building or if the theater has been razed.