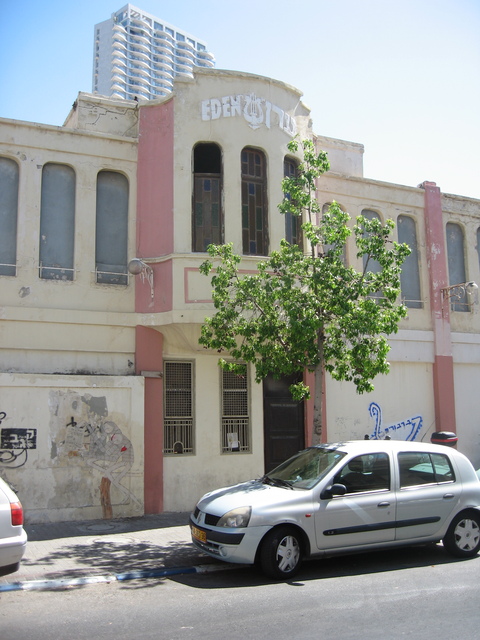 Located in the now gentrified Neve Tzedek district of Tel Aviv which has some of the earliest buildings in Tel Aviv. The Eden Cinema dates from the turn of the 20th century and was one of the earliest cinemas to be built in the city.

The Eden Cinema was used as a live venue when it hosted ‘La Traviata’, the debut performance by the then newly formed Palestine Opera on 28th July 1923 as no suitable performance space was available at the time. Famed Russian conductor Mordechai Golinkin set up the Palestine Opera, which today is known as the New Israeli Opera.

On 4th and 5th March 1940, during times of unrest there are reports of a student dying from injuries sustained in a baton charge and a bomb exploding outside the Eden and Orient Cinemas which caused no casualities. Crowds attempt to burn down the Eden Cinema and barricade the street, but were dispersed by troops and police.

The building today is owned by the Bank-Leumi who I believe use it as a back-up to a computer bank center in Lood.

Any further information on this most historic cinema would be appreciated.

A close up photograph of the upper facade of the Eden Cinema:
View link

The Eden cinema opened in August 1914 and closed a short while after by the Turkish authoroties – they claimed that the projectors were used to signal british submarines in the Mediteranian. The cinema reopened in 1917 with the new order of the british mandate. Eden was the first and only cinema in Tel-Aviv till 1927. With the establishing of the new state of Israel and changes in the city and the new movie theatres, the Eden lost its appeal, now showing mainly indian, greek, and turkish movies of poor quality. The place closed in 1974.

A recent photograph of the exterior of the Eden Cinema:
View link

My great-great grandfather started the Eden Cinema. My family has photos of the cinema and the staff and movie passes and such things. I am looking for more information though as I don’t have too many details about it. Thank you for your post.

Hi Jess, If you belong to either the Abarbanel or the Wiser families, then you people have most of the info, certainly the photos, regarding the inside story of the Eden Cinema. If you are interested in a critical approach to the Eden days(and you can read hebrew), try my book: Projecting Power – The Cinema Houses, the Movies and the Israelis (Resling, Tel-Aviv, 2006)

The Eden Cinema in Tel Aviv, probably quite a bit earlier than the house in Jerusalem, was built by Mordechai Weiser and Moshe Abarbanel. Weiser was one of the founders of Tel Aviv. Ofer Adaret’s recent article about the Eden Cinema can be read online at this link.