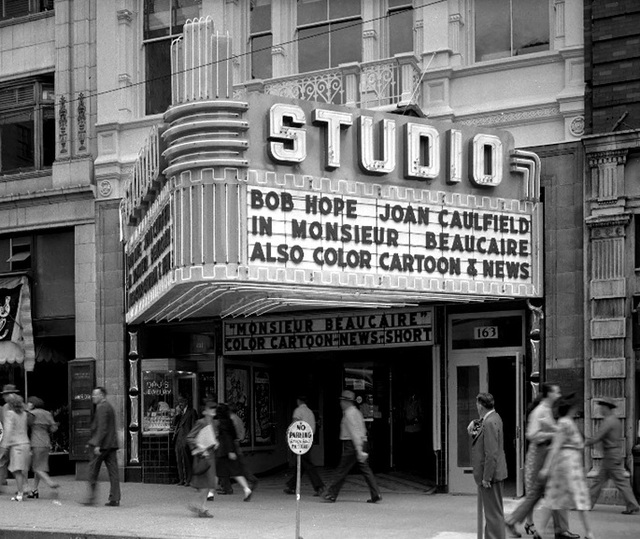 Built in 1933, just across the street from the Utah Theatre, the this originally opened as the Stadium Theatre on November 4, 1933. It was renamed the Studio Theatre on April 21, 1934 and by the early-1940’s it was operated by Paramount Pictures Inc. through their subsidiary Tracy Barham.

When operated by Intermountain Theatres a fire caused damage to the interior in June 1939, and the theatre became was somewhat austere, and once referred to by a movie critic as a ‘long isle with seats’.

From March 28, 1975 the theatre was last operated by Plitt Theatres as a discount theatre, called the Utah III (Utah I & II were in the former Utah Theatre opposite).

Eventually, the theatre was converted into a store, and continues to operate as such today.

I hate to say it, but you have the wrong building. The Studio was in the Bamberger Building. The space is empty. The store front has art work, placed there for the Olympics.

Sorta a weird Triple theatre,Guess Plitt was right,but often a discount house will make money and heck you could walk the print across the street.Amazed how many cities have no bargin theatres.We have seven plex $2,00 house that does well.

1972 photo added via Photographs From The 1970s Facebook page. Utah on the left, Studio/Utah III on the right.

The 1939 redecoration of the Studio was occasioned by a fire on June 7 which damaged the interior and destroyed the sound system, as reported in The Film Daily of July 21. The house was then being operated by Intermountain Theatres.