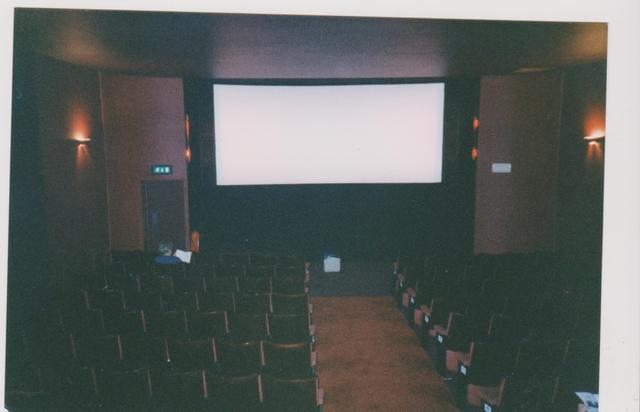 Built for and operated by Oscar Deutsch’s Odeon Theatre’s Ltd chain, this opened as the Odeon Theatre on 25th July 1936 with Charles Chaplin in “Modern Times”.

The exterior facade was clad in large slabs of vitrolite in peach and black with bands of green. On the left hand side is a small tower feature which originally had a small ‘Odeon’ name sign on top. Inside the auditorium seating was arranged in a stadium style with no overhanging balcony, but it had a raised seating area at the rear. The original seating capacity was for 932 (602 in the stalls and 330 in the raised balcony area). Illuminination was via a cove containing hidden lighting which ran around the edges of the flat ceiling.

The Odeon was one of the circuit’s cinemas that was sold to the Classic Cinemas chain on 10th December 1967 and it was re-named Classic Cinema. It was twinned from 30th June 1972 by dividing the auditorium straight down the centre, making for two rather narrow auditoriums, each seating 284. The Classic Cinema closed on 31st January 1985 and the building lay empty for a while.

The building has been much altered with the vitrolite slabs removed from the exterior which now gives the building a rather drab appearance and there is practically no trace of any of the original decorative details within the building.

Flicks Cinema was closed on 29th November 2007. By 2009, it had been converted into the Academy nightclub and Rivals Sports Bar, which closed suddenly in January 2014. In 2015 it re-opened as the Channel Club

Rivals Nightclub closed in January 2014 and the staff were dismissed without being given a reason. FS Leisure of Herne Bay have spoken unspecifically about redeveloping the site.

Interior shows Screen 1 of Flicks in 1998. Screen 2 was similar

The Nightclub has re-opened as the Channel Club under new management. The former cinemas are now in use as the Ocean Rooms