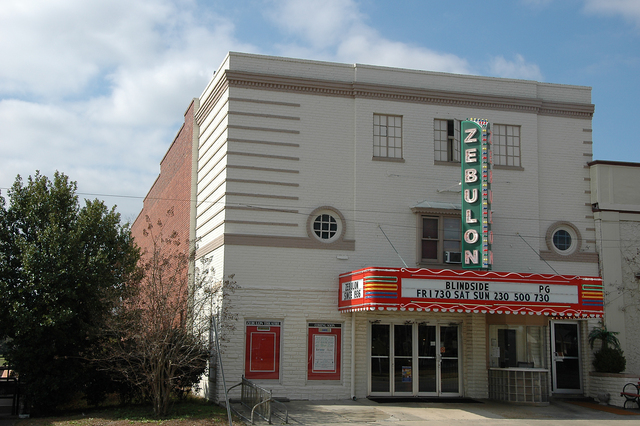 The Zebulon Theatre was opened on April 15, 1936 as a 650-seat theater by Ms. Ethel Blanton who named it after her husband Zebulon Blanton.

In 1950 the Blanton Family sold the theatre to The Dunn Family Theatre’s Inc. and was operated under that family business until 1973 when Mr. Larry Bearden purchased it and ran it successfully until he retired in 2000.

The Community Foundation of South West Georgia purchased the theatre on December 15, 2000 and it is now operated by the Regional Community Center, a non profit organization.

The Zebulon Theatre is still a single screen Adams-style building with a seating capacity of 350 – including the balcony.

The building has seen very little change since it was built in 1936 with the only changes occurring in the snack bar, the addition of a new marquee, a new popcorn machine (that is still in use today), new Simplex XL projectors (that are also still in use), and a new ticket office that was added in 1950. New seats and wall coverings were also added in 1990.

The Zebulon Theatre now plays sub-run movies and is a family friendly theater that only plays movies with a rating from G to PG-13.

According to the theatre, “Just about ever person that was born in Grady County can tell you some kind of story of when they were kids and coming to the Zebulon Theatre to see a movie, or how they courted their now-husband or wife at a Saturday afternoon movie. People even have fond memories or working at the snack bar, taking up tickets for running the Simplex XL projectors in the projection booth”.

They also add “The Zebulon Theatre is a jewel in Grady County that we are proud to still have, when so many of the old movie theatres have been torn down in the name of progress”.

We just finished a 100,000.00 remodel on the inside of the theatre. We now have new handicap bathrooms, new stair case to the balcony, new seats with cup holders, and have fixed all of the code issues you have with and old building. We are not done yet still need about 200.000.00 more to finish with the building

Lost Memory next time you are by the Zebulon please come in. I am the projectionest so I am there 99% of the time would be really nice to meet you and give you a tour of the theatre. That goes for anyone else who finds them self in Cairo and would like to see the theatre. I like to talk about the old girl and show her off.

I have many fond memories of growing up in this theatre. Larry Bearden is my brother, and I spent time here as a child in the sixties when he was working here. It was called the Dunn Theatre then. When Larry took over the theatre in the early seventies, he gave me my first job. I spent my teenage years working in the snack bar. I love this place and am happy that it is still with us and is in great shape. The volunteers who oversee and run the place are to be commended for keeping a gem like this up and running. If movieman38 is you Sheldon, then I will certainly take you up on your offer next chance I get.

What a treasure, way to go Cairo, wish other towns would see the value of the treasures they have before it’s too late, too many have been lost already.

Larry Beardon should get all the credit. My family owned it prior to Larry’s ownership, and probably never taken time to rennovate and run it. So Kudos to Larry for preserving it so beautifully.

Back in the 1960’s, as a kid, I used to go to the Zebulon every Saturday. I was nearly always the first to buy a ticket.

The ticket lady, I think, was named Ms. West. Does anyone remember her full name? She worked there for as long as I could remember when I was growing up in Cairo.