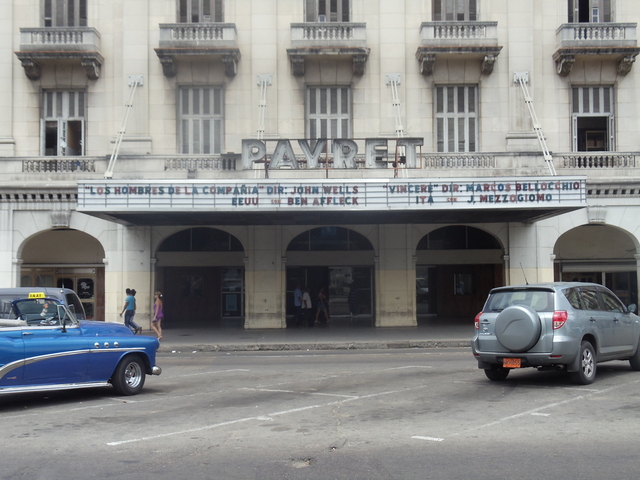 The Cine Payret is located in the Habana Vieja area of central Havana, opposite the Gran Teatro, and is one of the largest cinemas in Havana. In 1952 it was operated by Augustin Batista.

It has a Classical style façade, but the interior of the building is in a Streamline Moderne style designed by Arellano & Batista. Seating is provided in orchestra & balcony levels. On the auditorium walls are bas-reliefs depicting the nine Muses and a bronze figure called ‘Illusion’ by foremost sculptress-Rita Longa ins in the lobby.

It’s progamming consists of Cuban films, occasionally a Hollywood blockbuster and is one of the main venues for the Havana Film Festival.

The present building of the Payret Theatre opened in 1951 as a first run movie theatre. It had the distinction of showing the first CinemaScope film made “The Robe” in 1953. It boasted the largest wide screen in Havana, around 60ft. I remember as a child seeing The Robe and was very impressed with the full stereophonic sound. Eventhough the exterior architecture is neo classic, the interior is very modern, with wonderful basrelief figures of the 7 muses on each side of the proscenium. It has approximately 2000 seats, being the largest cinema in Havana. Considering the little maintenance given, it is in fair shape although it needs new carpets and seats. After almost 40 years absence I returned to Havana and attended a show there. The curtains are different and do not enhance the off white auditorium walls bu it still looks as I remember so long ago. Obviously the economic stagnation after the revolution saved this grand dame of movie theaters. They dont make them like this anymore.

An Eddie Murphy film was playing at the Payret last year. If we’re still trying to demoralize the Cubans, showing them “Norbit” might do it:
http://tinyurl.com/ywk53m

Cine Payret is mentioned in Oscar Hijuelos' new novel “Beautiful Maria of My Soul,” along with a few other theaters in Havana and other parts of Cuba.

Boxoffice of January 6, 1954, said that Cine Payret’s recent presentation of “The Robe” was the debut of CinemaScope in Latin America. The strikingly modern lobby of the theater was featured on the cover of the Modern Theatre section of the same issue of Boxoffice.

This theater was inaugurated on 21 January 1877, owned by opulent Catalonian Joaquín Payret, trying to rival Teatro Tacón. It was consecutively known as Teatro de la Paz and Coliseo Rojo. It is purportedly the first theater in the country to show movies, in 1897. It was located on Paseo del Prado between San José and Teniente Rey, across from the National Capitol building, one block north of the “Capitolio” theater. It was rebuilt in 1951. I saw Mexican film “Canaima” there with Jorge Negrete and Charito Granados. The theater is incorrectly positioned on the street map.

Guarina All you say is very interesting any chance to contact you?