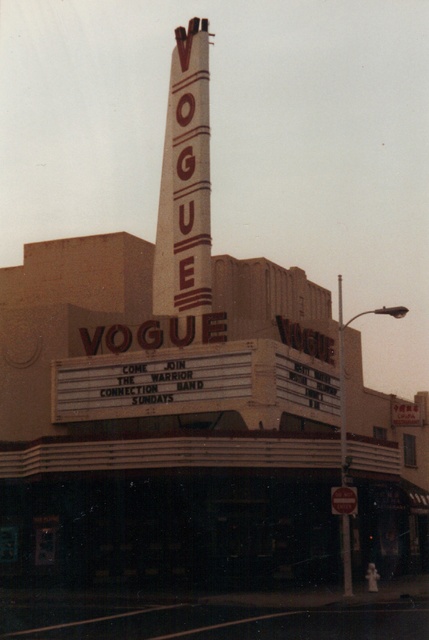 Opened in early-1948 by the Blumenfeld Theatre Circuit, seating was provided on a stadium plan, with a raised stepped section at the rear. The side-walls of the auditorium were decorated with large mural depicting Regency style figures in various poses, the work of interior designers Design & Decoration Studios.

This small theater closed and was being used as a church until May 27, 2022 when it was destroyed by fire.

I guess that would help. Maybe they could put the h on the end of the city’s name as well.

The Vogue Theatre in Pittsburg was opened by the Blumenfeld Circuit on February 20, 1948, according to Boxoffice Magazine’s issue of April 3 that year.

This 1914 photo shows an unidentified theater in Pittsburg:
http://tinyurl.com/cdxj3v

What I was impressed most with in the Vogue theater in Pittsburg, California was the huge painting on the lobby wall called “The Horsemen Of The Apocalypse”. Artist unknown. I dropped in during the church’s renovation and it was gone. I used to roam around the Vogue when I was with the cleaning crew around 1964 and I saw the torch job done on the walk-in safe door and the damage the molten metal did to the carpet. At that time the Vogue was already deteriorating and was helped along by the destructive patrons. I’d rather rent a movie and stay home and watch it on my 32 inch lcd. The gang-bangers who loiter around the Brenden theater in Pittsburg and the destruction occuring inside the Brenden along with the loud youth and the candy throwing will soon drive everyone away.

Just happened to be talking about this theater today with my mother… Why? Because she mentioned that my nephew’s church where he’s assistant pastor used to be an old theater in Pittsburg. Took me about 10 seconds to find the old theater’s name at this great website. :)

Thank you for the photo of the lobby of the Vogue in Pittsburg, California. I have no memory of the painting but I think I recall the carpet design. I think the photo is the part of the lobby as you turn the corner to your right. What you are seeing is the restroom entrance and the doors to the seats would be to your left. Unless this is the lobby from the street and the concession stand would be on the right. I was friends with the nephew of the cleaning crew and we used to go all over the building in the early morning hours. Even walk along the attic and pull the light pots to peer way down below to the seats. But I’ll never forget the oxy-acetylene torch and the damage it did to the carpeting. The thieves cut a large arc on the safe instead of picking the lock or drilling to throw the latch in the internals. But someone must know where a copy of the painting exists of the “Four Horseman Of The Apocalypse” which was on the lobby wall. The horsemen in this particular painting had no faces and the horses were fierce looking. It made quite an impresion on me. Pittsburg had Camp Stoneman and the barracks were converted to welfare housing complete with lice and cockroach infestation. An occasional live hand grenade would show up. The Pittsburg Corporation Yard kept an actual North American F-86 Sabre jet without wheels or wings with the intention of making an amusement ride out of it but that never came to fruition. During WW2 Stoneman’s soldiers daily marched down Harbor Street to the river docks where the troop ships awaited them. If you were a student attending either Village Elementary or Pittsburg High School and had to cross Harbor you had to do it before the troops marched as they weren’t stopping for nobody. The Stoneman the camp was named after is the same Stoneman mentioned in the song by The Band and the same Stoneman who was the 15th governor of California.

The Stamm theater in Antioch, California is also a church. The California theater on Railroad in Pittsburg, California was closed, according to rumor, because a drunk driver hit it with his car. That doesn’t make any sense. I’m happy it has been renovated. The Enean, also in Pittsburg, has been closed forever. The Vogue suffered from small town minds that were small. The manager was cheating on his wife and brought his decked out girlfriend to his office. His office also had a walk in safe that was cut open by a torch. The carpeting was ruined by the molten metal produced as the torch did its work. Vandals made it a point to pull off any loose wallpaper. Gum and candy stuck to your shoes as you walked to find a seat. Loudmouths threatened violence and threw things. The Mayan theater, also in Pittsburg, is also lacking steady maintenance. I saw the movie The Grudge at the Mayan. (The Mayan ran a short film praising the owners of the Mayan and their chain of theaters. This film made it appear as if the owners were a driving force behind the greatness and glory of the theaters as places to see movies.) It was a nice experience to hear the women scream as the movie progressed. Lots of families. Lots of lighted cell phones in the audience. I feel movie theaters are meant for the community. People are afraid to attend movie theaters because the movie theaters do not provide security against people who do antisocial things. You are safe and secure in your house watching a movie plus you can watch it as many times as you please and go over certain parts. The bathroom is close and snacks are even closer. If people behaved and were sociable and kind then people would attend movie theaters. The Vogue in Pittsburg ended showing Spanish language films. The Sunset apartments across the street from the Vogue in Pittsburg, California rent to SSI and welfare recipients who sell drugs. That area once had Safeways and Lucky supermarkets a block away. The Vogue building once rented to doctors and other professionals as well as a restaurant. It is The Last Picture Show for the Vogue.

Unfortunately, the theater was destroyed by fire on 5/27/2022. The church who owns the building hasn’t stated if they plan to rebuild.