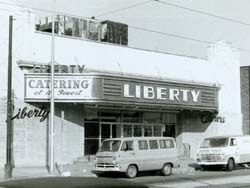 Opened in 1921, the Liberty Theatre seated 1,484. Located on Torresdale Avenue, northeast of Knorr Street and not to be confused with another Liberty Theatre on E. Columbia Avenue (now renamed E. Cecil B. Moore Avenue). This Liberty Theatre was equipped with a United States organ. By 1941, both of these Liberty Theatres were operated by Warner Bros. Circuit Management Corp.

This Liberty Theatre closed in 1960 and was later converted into a banquet hall. By 2011 it was in use as a church.

I practically lived in this theater from when I was 6 to 11 years of age. That’s about 1955 to 1960. Admission was 25 cents. My mom would give me 25c and a bag of snacks. The matinee started around 1:00pm, first there were a few cartoons and then 2 movies. If you wanted, you could stay and watch both movies again. They also had some old News films and sometimes films of bike races, and every ticket had a bike number stamped on it, and if you bike won you received something free? Looking back, I would see some of my cousins and their friends, or kids from the neighborhood, or kids from my school, Disston School. I seen movies like, Old Yeller, The Brave One, Run Silent Run Deep, and many other hollywood movies from the 1950’s. Great memories! It was a huge place with 3 sections and one Screen.

Also, I wantd to mention, on one Halloween (late 1950’s) they had a live horror show in the theater. It was packed!

In what style was the Liberty designed and who was the architect? Please share . . . and thank you!

Incidentally, this neighborhood is Tacony — not Wissinoming.

Did it really close in 1960 or a couple of years later? I thought I saw Sally Star in “The Outlaws IS Coming!” with the stooges (1965) at the Liberty. Before it became a catering hall, wasn’t it a sports venue for fights for a short time? Thanks!