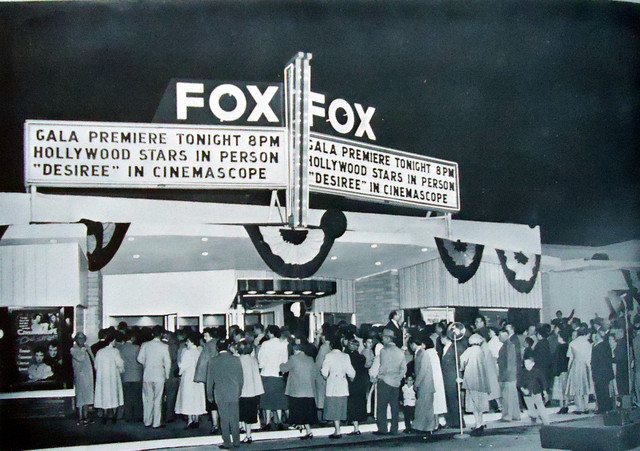 The last chain closed the theater in 1984. Sporadic attempts were made by subsequent lessees to re-open the theater, but it closed for the last time in 1991. The building is now owned by a chemical company, which leases out the front of the space to a restaurant. The rest of the building is used for storage.

I saw this theatre when traveling home from Death Valley in 2000 with friends. Unfortunately I was cameraless. I have since seen photos of when the theatre was new, and the exterior as I saw it was virtually unchanged from what the photos show, save for the removal of the FOX name from the marquee. The interior was very plain, save for the ubiquitous floral swirls of what would eventually be known as the Skouras Style. The concession counter was adorned with these swirls on panels of etched aluminum, as was done in so many Fox houses of the day. In its heyday, this theatre must have been a little visual oasis (both decoratively and via the product exhibited therein) in what was and is a majestically bleak and culturally remote part of California.

I believe the first manager of the Trona theatre was Ernest “Doc” Sloan. I worked for him at the Van Nuys theatre from 1954 until he transferred to Trona in 1955 or 1956. He was a good man, and absolutely, dead honest. Because Trona is rather remote I believe that is the reason he was transferred there. Fox trusted him.
If the pictures you mentioned are available on the internet would you guide me to them? I was never able to visit.
I haven’t thought of him in years.
Thank you in advance. Carlene

So there were two theaters in Trona in the 1950s? Seems like kind of a small town for that. This article mentions a theater in 1948:
http://www.trona-ca.com/1948.htm

An illustrated article about the Fox Theatre in Trona was published in Boxoffice, April 2, 1955. The new house had 648 seats and featured a curved screen 19x45 feet. No architect is named, but it was most likely designed by whoever the Fox West Coast circuit’s in-house architect was in 1954 (Carl Moeller, perhaps?)

Photos with the article show some art moderne touches in the lobby and the wall murals in the auditorium, but the auditorium ceiling showed exposed steel beams and the walls were of exposed concrete block. The facade was basic 1950s modern. The booth was equipped for CinemaScope, VistaVision, Magna, Todd-AO, and large screen television projection.

Here is a fresh link to the 1955 Boxoffice article about the Fox Theatre in Trona.

The Box Office article states the booth was equipped with Todd-AO. That is not the case. The booth looks like a standard Fox West Coast Theatres issue. Yes for CinemaScope and 4-Track Magnetic Stereo Sound.

I suspected that the claim about Todd-AO was wrong. There was a lot of hype flying around about the original Todd-AO format in the mid-1950s, and it pretty much all came to nothing.

Was in the restaurant portion today having coffee; and asked about the auditorium portion and if they’d sublease it. The chemical plant owns the building now and as stated above, uses it for storage. The snack bar portion is not original; but the area still has that theatre look. Sept 26, 2017 (btw… Coffee is only $1. there).